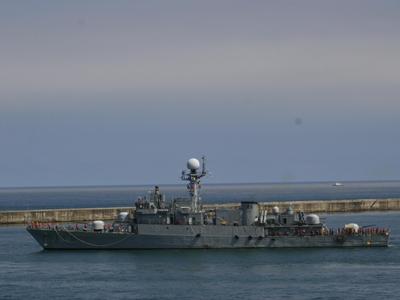 The government of oil rich but authoritarian Equatorial Guinea is reportedly negotiating the purchase of up to three corvettes worth an estimated price of $90 million from South Korea.

Park Young-june, a vice minister in South Korea’s Ministry of Knowledge Economy, told the press agency that Obiang informed Lee about Equatorial Guinea’s plans to improve its national security by purchasing warships from abroad. However, no further details about the possible purchase, including the specific type of vessels to be procured, have yet been provided, defpro reports.

Portuguese-language reports in July suggested Equatorial Guinea was to purchase a Barroso-class corvette from Brazil. The reported deal follows a visit to the authoritarian former Spanish colony by Brazilian president Luiz Inácio Lula da Silva. The defensa.com website reports initial discussions apparently started in February 2010. A memorandum of understanding for that acquisition was reportedly signed July 6 with Emgepron, “a private company linked to the Ministry of Defence through the General Staff of the Brazilian Navy.”

Emgepron also built a 46.5 metre patrol vessel, the Brendan Simbwaye, for the Namibian navy. The defensa.com continues the final contract “should be signed” at the Euronavale 2010 exhibition, to be held in October at Le Bourget outside Paris, France. It is not clear if this happened.

Janes Defence Weekly reported somewhat differently that same month, saying that a letter of intent was signed in 2006. It expected the contract to be signed next year and the Grupo Synergy-owned EISA yard to build a modified Barroso design with a lower displacement than the 2350-ton ship in Brazilian service. It adds the new variant will feature a CODLAG (combined diesel-electric and gas) propulsion plant with MTU diesel engines and a reduced armament: instead of a Vickers 4.5-inch (114.3 mm) Mk 8 main gun, the vessel will be equipped with an Oto Melara Super Rapid 76 mm gun. The Exocet anti-ship missiles will also be left out, but the ship will retain a Bofors 40 mm anti-aircraft cannon “as well as the ability to operate a light to medium helicopter.” The vessel would reportedly be fitted with a Siconta Mk III tactical control system, a TTI (Terminal Tático Inteligente) tactical information system, an ET/SLQ-2X electronic countermeasures and an ET/SLR-1X electronic support measures system.

However, corruption and political repression is said to be rife in the 616 000-strong nation, with most people living in extreme poverty. The US Center for Public Integrity on a November 2002 report said “oil companies do not view Equatorial Guinea’s military – a product of decades of brutal dictatorial rule – with much confidence… Seven of the army’s nine generals are relatives of the president [who took power in 1979 after deposing and executing his uncle]; the other two are from his tribe. There is no clear command structure, the level of discipline is low, and professionalism and training are almost non-existent, according to locals and foreign oil workers. Even the presidential guard – an indication of the lack of trust in the country’s forces – is composed of 350 Moroccan troops.” The IISS does not list the Moroccans.
defpro speculates that should Equato Guinea buy South Korean ships, it will likely be second-hand Pohang- (pictured) or Donghae-class vessels. South Korean yards have built four of the former and 24 of the latter, including the Cheonan, lost in the Yellow Sea in March 2010 to an apparent North Korean torpedo attack.