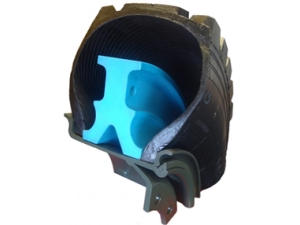 The first trial was conducted on Monday 28 May and the target set by OTT was 30km at 30km/h. The RunFlat systems were fitted to two x 10-inch x 20-inch split rims with 14.00 R20 Continental tyres. These wheels, completely deflated, were fitted to the right front and the left rear of the OTT Technologies M36 Mk6C vehicle. The total mass of the vehicle was 16 000kg spread almost evenly over the four wheels (ie, approximately 4 000kg load on each wheel). The 30km was completed without any sign of deterioration to either the runflat inserts or tyres and it was decided to keep driving. At the 60km mark, there was still no sign of any deterioration to either the runflat or tyre. The vehicle speed was then increased to 50km/h and was driven to a total of 65.3km, at which point the trial was terminated. On completion of the trial, the right front tyre was displaying a radial crack in the side wall, which had no adverse effect on mobility. The runflat inserts were still completely intact. The second trial was conducted on Thursday 31 May and the target was set at 50km at 50km/h. The vehicle and set-up was identical to that of the first trial.

The 50km was completed without incident, and while the tyres showed some signs of deterioration, the vehicle still had full mobility.

In both trials, the driver of the test vehicle, the OTT Technologies M36 Mk6, reported no difficulties in the handling of the vehicle while in runflat mode. Alex Chandler, technical manager for RunFlat International, UK, was in attendance for both trials and he expressed his delight at the professional way in which the trials were conducted, and said: “Although the results are completely in line with the specifications of the product, it is good that the local market now has confirmation from a recognised South African test authority that the product actually does what it says on the brochure.”

Gerotek adding value to road safety and the economy