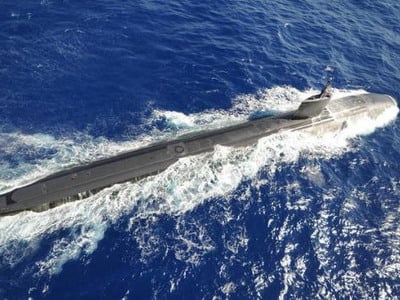 Scientists have made a discovery that could lead to submarines and other vessels to travel twice as fast as currently possible in and under water.

The Indo-Asian News Service (IANS) reports that a team at the Swinburne University showed that the drag on hot bodies moving through a liquid can be reduced by up to 85%, doubling their speed.

The physics journal Physical Review Letters reported that the findings could help submarines double their speed under water.

Swinburne researchers Ivan Vakarelski and Professor Derek Chan observed that a heated ball can fall through liquid more than twice as fast as a colder, ‘control’ ball, according to a Swinburne statement.

The discovery exploits the drag-reducing properties of a vapour layer formed between a hot body and surrounding liquid, known as the Leidenfrost effect.

The Leidenfrost effect can be observed by pouring drops of water onto a hot plate – the drops roll and dance around on the plate instead of staying in one place or spreading out.
“A very hot body – hot enough to vaporise the thin layer of liquid in contact with it – can drastically reduce energy-sapping drag forces when such bodies travel at high speed through the liquid,” Chan said.

The research, partly funded by the Australian Research Council (ARC), was theoretical in nature, but may have potential military applications.

Chan – an already distinguished ARC principal investigator working in the area of surface science at the nano-scale – stressed the genesis of the discovery was motivated by novel science.
“This is a novel use of an idea that has been around for over 200 years. We did not set out to do the research with any particular application in mind. We were just curious about a new possibility. But we welcome technologists taking it on and developing it further.”

He conceded it could have military applications, such as helping to make submarines, torpedoes and even sea-launched missiles drastically swifter for short periods.
“But this is really very fundamental research and I see the possibility of broader applications in efficient energy usage. For example allowing marine vehicles to travel faster and further for the same amount of energy or power, and ultimately contribute to reducing greenhouse gas emissions,” he said.

Chan was part of the discovery team that published the paper, ‘Drag Reduction by Leidenfrost Vapor Layers,’ with researchers Dr Ivan Vakarelski, Professor Sigurdur Thoroddsen and Dr Jeremy Marston from the King Abdullah University of Science and Technology in Saudi Arabia.

Another method of making underwater objects faster is through supercavitation. This occurs when water pressure is lowered and, since water boils faster/at a lower temperature at lower pressure, creates vapour. Typically, small bubbles of water vapour form, and implode when they come in contact with the more highly pressurised water around them. Supercavitation usually forms around objects moving at high speed (such as propeller blades) and is usually harmful.

The upshot is that objects travel much faster whilst inside a large cavitation bubble. To date, only torpedoes have been able to make use of the supercavitation effect to travel at 400 km/h under water – the typical torpedo travels at only 60-80 km/h.