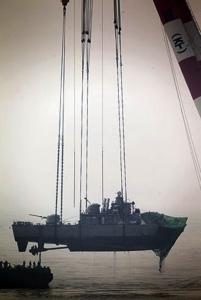 US President Barack Obama has directed his military to coordinate with South Korea to “ensure readiness” and deter future aggression from North Korea, the White House said this morning.

The United States gave strong backing to plans by South Korean President Lee Myung-bak to punish North Korea for sinking one of its naval ships, White House spokesman Robert Gibbs said in a statement. The White House urged North Korea to apologise and change its behaviour, he said.
“We endorse President Lee’s demand that North Korea immediately apologise and punish those responsible for the attack, and, most importantly, stop its belligerent and threatening behaviour,” Gibbs said in a report carried by Reuters. “US support for South Korea’s defence is unequivocal, and the president has directed his military commanders to coordinate closely with their Republic of Korea counterparts to ensure readiness and to deter future aggression,” he said. Obama and Lee have agreed to meet at the G20 summit in Canada next month, he said.

Late last week, a team of international investigators accused North Korea of torpedoing the South Korean corvette Cheonan in March, killing 46 sailors in one of the deadliest clashes between the two since the 1950-53 Korean War. Lee said this morning South Korea would bring the issue before the UN, whose past sanctions have damaged the already ruined North Korean economy.

The United States still has about 28 000 troops in South Korea to provide military support. The two Koreas, still technically at war, have more than 1 million troops near their border. “We will build on an already strong foundation of excellent cooperation between our militaries and explore further enhancements to our joint posture on the Peninsula as part of our ongoing dialogue,” Gibbs said.

Gibbs said the United States supported Lee’s plans to bring the issue to the United Nations Security Council and would work with allies to “reduce the threat that North Korea poses to regional stability.” Obama had also directed US agencies to evaluate existing policies toward North Korea.
“This review is aimed at ensuring that we have adequate measures in place and to identify areas where adjustments would be appropriate,” he said.

Reuters separately reports the two Koreas are today raising their war-like rhetoric on Monday, threatening conflict if the other side pushes too far in escalating tension over the sinking. The increasingly vitriolic comments across the heavily defended Cold War border are rattling investors and niggling at diplomatic relations in the economically powerful region, Reuters says.

But few analysts believe either Korea would dare go to war. The North’s military is no match for the technically superior South Korean and US forces. And for the South, conflict would send investors scurrying out of the country. An angry North Korea has however threatened to fire at equipment the South said it would put up to broadcast anti-Pyongyang messages and was ready to take stronger measures if the South escalated tension. It also issued a statement repeating its position that it had the right to expand its nuclear deterrent.
“North Korea’s goal is to instigate division and conflict,” said Lee, speaking from the country’s war memorial in the capital Seoul. “It is now time for the North Korean regime to change.” In what may alarm Pyongyang as much as anything, its wealthy neighbour said it plans to reduce the number of workers in a joint factory park just inside the North which has long been an important source of income for the North Korean leadership.

Much of the diplomatic focus will be on China, the only major power to support North Korea and which earlier this month — to the annoyance of the South — hosted a rare overseas visit by the North’s sickly looking leader Kim Jong-il, the wire service adds. US Secretary of State Hillary Clinton, on a visit herself to Beijing, urged China to cooperate on the challenge posed by the sinking of the Cheonan. The United States is pressing China to join international condemnation of North Korea. Beijing has so far avoided joining in the blame of Pyongyang, saying it will make its own assessment of why the ship sank.

Analysts say Beijing is terrified of any action that might cause the already shaky North to collapse, sending chaos across into its territory and, perhaps even more worrying, leading to US troops moving up the peninsula right to its border. That means China is likely to be reluctant to support more sanctions against the North, whose economy is already in tatters.

The US Armed Forces Press Service, meanwhile, adds South Korean officials now say they have proof that North Korea torpedoed the frigate including residue of an explosive used in a North Korean torpedo as well as other forensic evidence clearly implicating North Korea. “The evidence points overwhelmingly to the conclusion that the torpedo was fired by a North Korean submarine,” a South Korean defense ministry statement said. “There is no other plausible explanation.”

Salvage experts raised the ship, which had broken in half, from the sea floor near Baengnyeong Island. The Cheonan had a crew of 104. Officials said the vessel was operating south of a disputed sea border on the western side of the peninsula in the Yellow Sea. The Cheonan, a 1200-ton frigate built in 1989, was on a routine patrol mission.

The group also collected parts of the torpedo, including a propulsion motor with propellers and a steering section from the site of the sinking. “The evidence matched in size and shape with the specifications on the drawing presented in introductory materials provided to foreign countries by North Korea for export purposes,” South Korean officials said. Markings on the torpedo in Hangul are consistent with the marking of a previously obtained North Korean torpedo, they added. “The weapon system used is confirmed to be a high-explosive torpedo with a net explosive weight of about 250 [kilograms], manufactured by North Korea,” officials said.

The report reflects an objective and scientific review of the evidence, South Korean officials said. “It points overwhelmingly to the conclusion that North Korea was responsible for this attack,” officials said. “This act of aggression is one more instance of North Korea’s unacceptable behaviour and defiance of international law. This attack constitutes a challenge to international peace and security and is a violation of the Armistice Agreement.”

South Korea formed the joint civilian-military investigation group after the sinking and carefully shielded the group from a rush to judgment on the cause of the sinking. An international team of investigators from Australia, Great Britain, Sweden and the United States assisted South Korean experts in examining the forensic evidence left in the ship.