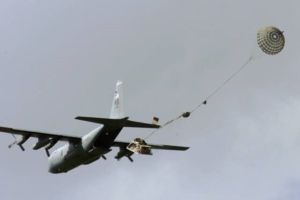 A soldier has died in a parachute accident during this year’s Exercise Young Eagle, the South African Army’s annual airborne force preparation exercise.

Gunner Jabulani David Masango, 25, who was based at 10 Air Defence Artillery Regiment in Kimberley was killed earlier today. The soldier was from Masechaba View, Nigel, and is survived by his father Mr. Bongani Masango.

A Board of Inquiry has been convened to investigate the incident.

The Minister of Defence and Military Veterans, Ms Lindiwe Sisulu, the Secretary for Defence, Ms Mpumi Mpofu and the Acting Chief of the South African National Defence Force, Lieutenant General Themba Matanzima, have extended their sincerest condolences to the family of the deceased.