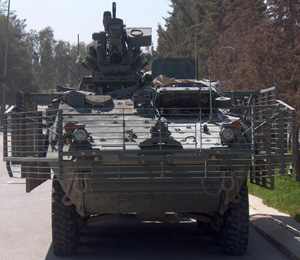 Systems has been awarded a contract by the US Army Tank Automotive Command (TACOM) to reset 330 Stryker infantry combat vehicles. The contract has a maximum potential value of $55.2 million.

Through this contract, General Dynamics will service, repair and modify Stryker vehicles that are returning from Operation Iraqi Freedom, restoring them to a pre-combat, like-new condition in advance of reissuing the vehicles prior to their next deployment, GD says in a statement.

To date, General Dynamics has delivered 2852 new vehicles for seven separate Stryker brigades to the Army.

The Stryker is an eight-wheeled vehicle, which is lighter, smaller and more readily deployable than other Army combat vehicles and can travel at speeds up to 62 mph on roads with a range of 312 miles.

The variants have 85% parts commonality, which simplifies logistics. Strykers operate with the latest electronic equipment and an integrated armor package to protect soldiers against improvised explosive devices, rocket propelled grenades and a variety of infantry weapons.