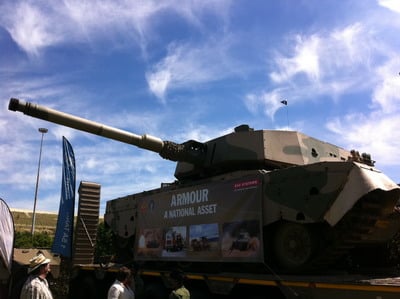 The latest Department of Defence and Military Veterans (DoDMV) annual report makes no bones about the problems the South African military machine faces with “challenges” in the form of financial constraints, a recurring theme throughout the 350 plus page document.

With some exceptions, the 28 different components of the department and the SA National Defence Force (SANDF), all report a shortage of funding which in turn impacts on the ability to retain people and keep prime mission and other essential equipment functioning.

The report, for the financial year 2012/13 which ended on March 31, was tabled in Parliament this month.

Minister Nosiviwe Mapisa-Nqakula makes an oblique reference to the lack of sufficient funding in her foreword writing: “When the defence force has enhanced capabilities, it is in a better position to contribute to the promotion of peace and security in the region, the continent and support the people of South Africa”.

This is carried further by SANDF Chief General Solly Shoke. In his introduction the country’s most senior soldier points out successes such as peacekeeping operations, border protection and the military skills development system but warns “the SANDF continues to battle with challenges on a range of issues inhibiting its ability to deliver on its mandate”.
“Central to these is the disconnect between our combat and support capabilities with the requirement to deliver on the SANDF’s Constitutional mandate. The Defence Review, currently in the approval process, will help resolve most of these challenges.”

In the financial statements accompanying the report note is also made of “capacity constraints”.

Secretary for Defence, Dr Sam Gulube, notes: “The DoD skills’ losses continued throughout the period under review, resulting in some critical skills needing to be acquired from industry at exorbitant cost. Although new personnel were recruited and trained, it will take time for these members to gain the necessary experience.
“The state of prime mission equipment, particularly in the landward defence programme, continued to decline to unacceptable levels. Additional funding provided for maintenance and repair of the operational vehicle fleet has had some effect, but is not sufficient to address this concern adequately. The rejuvenation of these capabilities therefore remains one of the DoD’s top priorities.”

As far as personnel is concerned the DoDMV had a total of 78 725 members in service at March 31 this year. This is 2 014 less than it had planned for.