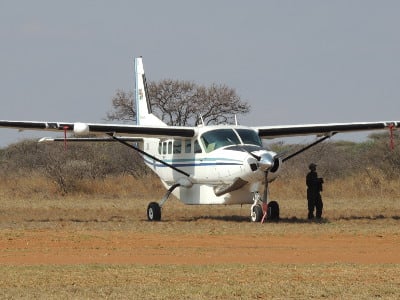 The South African National Defence Force (SANDF) has released the names of the five victims of the Cessna Caravan crash that occurred on Tuesday.

The three who died when their aircraft came down in the area of Lydenburg, Mpumalanga, are Major Tsepo J Malia (37), Captain Marcelino A Wembie (28) and Captain Francois P Hugo (27). The two seriously injured passengers were named as Sergeant C.B. Mabusela (36) and Corporal G.D. Ramasilo (47). All are from 41 Squadron at Air Force Base Waterkloof in Pretoria.

The Minister of Defence and Military Veterans, Nosiviwe Mapisa-Nqakula, the Chief of the SANDF, General Solly Shoke and the Chief of the South African Air Force, Lieutenant General Zimpande Msimang would like to convey their sincerest condolences to the families and loved ones of the deceased, the SANDF said, adding that they further wish the injured members a speedy recovery.

The crash is the third of its kind in as many years. In December 2012 a C-47TP crash in the Drakensberg killed 11 and all five people aboard an A109 Light Utility Helicopter died when their aircraft crashed in the Kruger National Park in March last year.

The opposition Democratic Alliance (DA) party called on Mapisa-Nqakula to launch a full Board of Inquiry into the crash and “what appears to be a worrisome trend within the air force”. Shahid Esau, Shadow Minister of Defence and Military Veterans, said it was crucial that the crash be investigated, not only to provide the bereaved families closure, but also prevent similar tragedies in the future.

The spate of recent accidents should be seen as a wake-up call to the government, according to Air Force pilots and technicians, reports Afrikaans daily Beeld, which said that a lack of funding is constraining the service. For example, 15 Squadron had to halt sea rescues because most of its flying hours were used to fly President Jacob Zuma to and from Nkandla.

Beeld reported that four of the South African Air Force’s nine C-130 Hercules are inoperable due to a lack of funds, while 19 engines need to be serviced at a cost of R10 million each, but the budget for the year is just R50 million.

Between April and December last year the SAAF had no support contracts in place with manufacturer Saab for its fleet of 26 Gripen fighter jets, with the Air Force doing basic hands on maintenance. A support contract worth R285 million was finally awarded in December and will see Saab support the Gripen fleet to 2016.

Last year the Air Force ended its maintenance contract with Denel’s Aero Manpower Group, resulting in 500 skilled technicians and engineers being retrenched. A handful were retained by the Air Force .