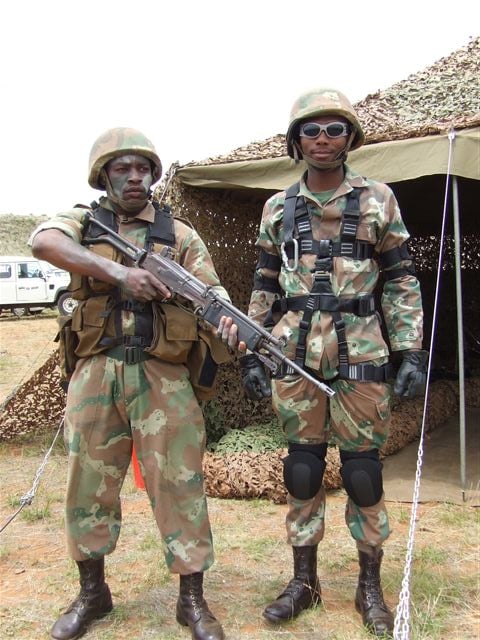 About 5000 Southern African Development Community (SADC) solders, sailors and airmen are headed for South Africa to take part in the inaugural exercise of the region’s peacekeeping brigade.
South African National Defence Force chief director of operations Rear Admiral Phillip Schoultz says the need for Exercise Golfinho (Dolphin) was identified at a SADC Interstate Defence and Security Committee (ISDSC) meeting in Angola in February last year.
The African Union decided soon after its formation in 2000 to establish an African Standby Force (ASF) that would include one integrated multinational brigade per region. The planning parameters provided an initial capability by 2005 and a fully operational force by June 2010.
Schoultz says the ISDSC took cognisance of “the fact that if we are to be operational by 2010 we better start doing something in the SADC. And so the exercise was born.”
The admiral says the exercise consists of three legs and is already underway. The first iteration is a map exercise (MAPEX) now underway in Angola. A command post exercise (CPX) will follow in Maputo, Mozambique in April and the force training exercise (FTX) will take place at the SA Army Combat Training Centre at Lohatlha in the Northern Cape in September. A naval FTX will take place off Walvis Bay, Namibia, at the same time.
The SANDF admiral adds the MAPEX “will determine the size, shape, etcetera of the main exercise which will then be practiced during the CPX in Mozambique and then be executed in SA. It is prepare us to conduct complex operations as a region.”
Schoultz says the last SADC exercise, Blue Crane, was held in 1999.
“What are the objectives of Golfinho? We certainly want to develop regional cooperation in the field of peace support operations. Reference was made of an exercise held ten years ago. This was very much with foreign funding, foreign support, it was a CPX-type exercise in the main.
“This one is home-grown from the writing of the scenarios to the development of all the doctrinal aspects such as the logistics, communications… everything.
“We also want to demonstrate as a region our commitment to participate in peace support operations. We don`t want to participate individually but collectively, we want to practice the doctrine that has been developed”.
SADC brigade
Schoultz also shed light on the size and shape of the SADC brigade. While not a standing structure, the formation will be a “classical brigade” consisting of a headquarters, up to five infantry battalions, a reinforced composite engineer regiment, a regiment “minus” of artillery, another of armoured cars, a company of military police and another of tactical intelligence personnel. The brigade will also have a guard and security element, a medical detachment, specialised attachments, support units, including extra transport, a well as air defence artillery, if required.

For Golfinho, the brigade will be built around a South African headquarters – with SADC augmentees and three infantry battalions:
•          1st Bn: Angola/Namibia/Zimbabwe
•          2nd Bn: Botswana/Lesotho/Tanzania
•          3rd Bn: Zambia/Malawi/Swaziland
A SA battalion will be tasked as the opposing force (OPFOR). “You must have an OPFOR. If you don`t have an OPFOR there`s no realism,” Schoultz added.
He noted that the availability of funding will determine the final force level. At present about 5000 are expected. “We need to find a balance between affordability and showing the resolve of the SADC to make a success of this initiative. Brigade exercises are not cheap. This exercise will be expensive.”
Schoultz said SA was planning a major exercise, Ndlovu, for this year in any case, “so our part of the exercise is budgeted for. It is in our plan.”
He says as far as the other countries are concerned, planners this month briefed the SADC Secretariat on the cost. “I`d not like to announce that now as there will be a ministerial meeting on the 25th in Cape Town and these figures will be presented to them. It will be for the participating countries to source there funding.”
Doing it right
The admiral says the Golfinho scenario is in part based on Ndlovu. “We said if we are going to so an exercise of this nature, lets do it right. So we must exercise all the components, military, police and civilian.
“Every peace mission today is multi-dimensional and one has to have all the components: military, police, civilians, and dare I say nongovernmental organisations present.
“The force levels must be deployed throughout. Let`s not start with a bang and end with a squib.
It`s going to do done the way a PSO is normally done. The scenario will require an intervention and there will be peace enforcement. So we will insert a force, probably 44 Parachute Regiment, and they will seize, dominate and then stabilise a certain area. Next a link-up force will be sent and we will do relief-in-line.
“We will then secure the lines-of-communications (LOC), because if you cannot get the supplies in to a peace mission you are in deep trouble. Maritime elements will play an important role, off Walvis Bay.
“We will also have LOC all the way up to Tanzania if they have to bring spares.
“Once we`ve set up the exercise, [dealt with resistance] and secured the LOC, the next idea is that we must bring stabilisation: this is the classic peace mission type thing – area domination, battlefield surveillance, patrols, improving infrastructure, humanitarian assistance, disaster relief and the like; thereafter hopefully normalisation, security sector reform, law reform and governance.
A comprehensive defence capability
Schoultz says the SANDF conducts exercises in order to enhance and maintain a comprehensive defence capability. “One way of doing that is to determine joint and multinational force preparation strategies and also requirements for force preparation. Once we`ve determined such requirements, we have to develop it into an exercise and after exercising we have to maintain contingency plans.” He adds developing these require wide consultation on new trends and skills sets required.