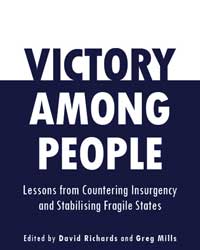 To mangle Clausewitz somewhat, the theory of war is simple, but the practice can be very hard. This also applies to counterinsurgency, the dominant form of armed conflict since the end of the old War.

“Victory among People” is a collection of largely thoughtful and very thought-provoking essays published by the British Royal United Services Institute and South Africa’s Brenthurst Foundation. Echoing General Rupert Smith (The Utility of Force – The Art of War in the Modern World, Penguin, London, 2006) the included articles on Afghanistan (there is very little on Iraq) argue that counterinsurgency is primarily about legitimacy – that of the state. The battlefield is the mind of he people, the prize their willing loyalty.

Breaking this loyalty and undermining the legitimacy of the state is the first task of the insurgent. Alas, in this they often have the help of governments: poverty, unemployment, the absence of meaningful democracy and a failure to deliver services greatly assist the disaffected. James F Dunnigan has argued all one needs for disorder are some weapons – and angry people. Violence, organised or otherwise, is a requirement for insurgency, breaking as it does loyalty and undermining legitimacy. It is important that the state not respond in kind – repression is the recruiting sergeant of rebellion. This is a welcome change from the standard body-count fare.

A strong lament, also made by Smith, is that Western politicians have decidedly failed NATO’s soldiers in Afghanistan for a decade by NOT determining an end-state. Thus NATO’s policy, strategy and action there lack foundation. There is no “strategic narrative” and as a result Western publics see their soldiers dying for nothing. Then there is the Kabul kleptocracy – as corrupt as it is illegitimate…

This is awfully depressing and it is well that the editors chose to include chapters taking lessons from the many other counterinsurgencies fought in recent decades: Eritrea/Ethiopia, Rwanda, Somalia, Rhodesia, Namibia and Northern Ireland. Richards writes that Sierra Leone, for example, “stands as an important example where overseas military intervention was not only justified, it was also successful and, equally importantly, relatively inexpensive.”
“Victory among People” is a must-read and a must-have.

Stratfor: The end of counterinsurgency and the scalable force