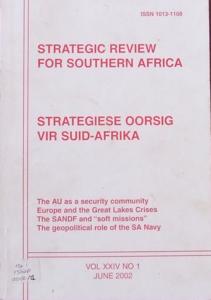 It is a rare to find military or academic writing clear of the convoluted language and obtuse thinking usually found in these fields. To the reviewer’s delight this is the case in this topical collection of essays on the current state of the SANDF. The booklet contains six essays, five of them by the always-entertaining Brig Gen Kruys.

Topics include SA Army doctrine and force development 1900-1968, the place of the principles of war, planning for Lesotho-style military interventions, combat readiness and finally, morale and discipline. Before writing this review, this commentator met Kruys at a seminar at the SA Army College in late November where he presented his findings to a group of senior, general and flag officers. No-one present disputed them.

Kruys points out that military skill are highly perishable. After the National Party gutted the Union Defence Force of its experienced commanders (1948-1950) and replaced them with affirmative action appointees, many skills were lost, among them the ability to command brigades and divisions. In the same essay he points out that it took the SADF from 1968 to 1984 to develop a maneuver-warfare based doctrine and train brigade and division staffs to standard.

What are principles of war? No substitute for common sense, one pithy colonel at the seminar opined. The feeling was that South Africa now had too many of these so-called principles (14) and that they had become a checklist to be followed during planning and something of a replacement for proper doctrine. Kruys, at the seminar, and in his essay warns the unwary against this. It should rather be seen as a guideline. “The final conclusion is that successful commanders will never knowingly violate the principles of war without first evaluating the risks they take. In spite of the fact that there are critics of the principles, history shows that most of the time the winners took heed of them and the losers did not.”

Reviewing South Africa’s intervention in Lesotho, Israel’s in Lebanon and the US in Vietnam, Kruys argues for a proper pre-deployment planning cycle bringing together political and military leaders to determine the feasibility of such operations and to ensure they are properly planned, rehearsed and executed. Unstated is the need for officers of character who can tell politicians when operations are not feasible or forces are not combat ready – even if it costs them their careers. The ultimate deterrent in such a case is officers willing to speak out in public why they acted the way they did. They will not be popular, but they will have retained their honour.

On the issue of readiness, readers are advised that business practices are best left to business. “Commanders at all levels must be good leaders who are well trained to do their jobs.” And they must command. An MBA may not be a help in this regard. Kruys also believes that officers should get to ply their trade in ceaseless preparation for war and should not allow themselves – or be allowed – to become uniformed civil servants. Unfortunately this is too often the case.

All told a valuable collection of useful essays.