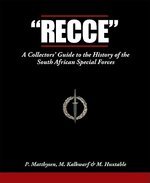 It is by a margin the best illustrated work yet produced on the South African Special Forces, old and new, with exhaustive detail on insignia, proficiency badges, uniforms, equipment an much else. The artwork and photography is spectacular and the captions topical and educational. The access the authors had to the Special Forces impresses in particular and this book is certainly the most up-to-date (current to October 2010) brought to print. The Special Forces has been careful to stand in the shadows since 1994, making this book a breakthrough in terms of detail on the post-1994 organisation. We South Africans have much to be proud of.

From a more historical perspective, “A Collector’s Guide to the history of the South African Special Forces” is a very useful addition to Peter Stiff’s “The Silent War” (Galago, Alberton, 1999) and Paul Els’ “We Fear Naught but God” (Covos Day, Johannesburg, 2000).

Recce: A Collector’s Guide to the history of the South African Special Forces