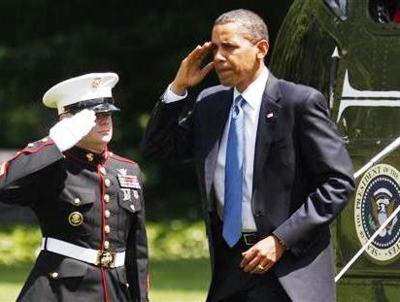 Even as warplanes dropped the first U.S. bombs on Islamic militant targets in northern Iraq, President Barack Obama faced doubts inside his administration and out that the limited mission he circumscribed was enough to shift the balance in a conflict threatening to tear Iraq apart.

Backed into a corner after months of steadfastly avoiding direct U.S. military action in the Iraq crisis, Obama has reluctantly ordered intervention in a country that Americans thought they had left behind long ago.

Now that the president elected in 2008 on a platform to end the Iraq war has returned the United States to a battlefield role for the first time since he pulled out troops two-and-a-half years ago, there are questions about whether he has an endgame.
“Two FA-18s dropping some 500-pound bombs on (militant) artillery is not going to turn the tide of this conflict,” said Ryan Crocker, who served as the U.S. ambassador in Baghdad from 2007 to 2009. “I don’t know what their strategy is.”

With Obama’s foreign policy already under heavy criticism at home and abroad for his handling of crises in Ukraine, Gaza and Syria, he can ill afford another major setback as he nears the mid-point of his second term with his legacy looming.

Obama on Thursday authorized the air strikes, arguing action was needed to halt the militant advance towards the Kurdish capital, protect Americans and safeguard hundreds of thousands of Christians and other religious minorities fleeing for their lives.

U.S. officials hope air power will provide breathing space for Washington to rearm Kurdish forces now facing the brunt of the Sunni militant onslaught and allow the Iraqi army to regroup after its troops melted away in the north during the Islamists’ lightning offensive in June.

It could also give the Obama administration more time and leverage to pressure fractious Iraqi leaders to form a more inclusive government, possibly without Shi’ite Prime Minister Nuri al-Maliki – a divisive figure who has lost U.S. favour – at the helm.

But with U.S. officials insisting there is no plan for a “sustained campaign” against the militants, many in Washington believe air strikes may do little more than blunt the Islamist advance instead of actually rolling it back. The group, which calls itself Islamic State, has declared a caliphate in the large swathes of Iraq and Syria that it controls.

Some U.S. officials privately voiced uncertainty within the administration about Obama’s goals and eventual exit plan. Obama and his aides have insisted there will be no commitment of U.S. ground troops in Iraq and the United States will not be dragged into another full-scale war there.

Despite pleas from the Iraqi government, demands from congressional critics and even advice from some of his own aides, Obama long resisted approving air strikes in Iraq even as Islamist forces swept violently across northern Iraq.

It was in keeping with Obama’s doctrine of avoiding new military entanglements, especially in the volatile Middle East, at a time when Americans are weary of more than a decade of war.
“I don’t know if he went into this kicking and screaming,” said Frederic Hof, a former Middle East adviser at the State Department in Obama’s first term. “But in some ways the president was put into a corner and obliged to take action.”

Obama’s calculus shifted after Islamic State, which seized a third of Iraq in recent months, made gains against Kurdish forces and moved towards Arbil, capital of the once-stable Kurdish semi-autonomous region.

Obama faced a chorus of international calls to act to avert an unfolding humanitarian catastrophe on a mountaintop where tens of thousands of Iraqis from the Yazidi sect were stranded and threatened by advancing Islamists.
“I’ve not heard the word ‘genocide’ used in the Situation Room before,” a senior administration official said of Obama’s urgent last-minute deliberations. “That word has a lot of weight.”

Obama was receiving updates about the deteriorating situation in Iraq as he met African leaders in Washington for a major summit earlier in the week. His top general, Martin Dempsey, hopped in the presidential limousine after the closing news conference for the five-minute ride back to the White House to give him additional details, the official said.

It was a series of multi-pronged Islamist attacks starting on Saturday and culminating on Wednesday in a threatened march on Arbil that finally forced Obama’s hand and led to his announcement of a “targeted” air campaign, a U.S. official said.

Though Obama was careful not to establish a “red line” – as he did but failed to enforce in the Syrian civil war – a senior U.S. official said the administration has “laid down a marker that we’re going to act to protect our personnel and facilities, that includes of course these two very strategically important cities, Arbil and Baghdad.”

But the parameters he stated for the U.S. intervention – protecting American personnel in Iraq and preventing what he called a “potential act of genocide – remained ill-defined to many in Washington.

Members of the U.S. Congress said they supported the aid drops and air strikes, but Republicans demanded that the president spell out a long-term strategy. Even Obama’s closest Democratic allies made clear they wanted him to work with legislators, not circumvent them.

Ken Pollack, former CIA and White House official now at the Brookings Institution think tank in Washington, said the closest parallel to the Iraq mission can be found in Libya in 2011, when Obama pledged, also on humanitarian grounds, to protect the city of Benghazi against an impending massacre by forces loyal to Muammar Gaddafi.

Many expected a major U.S. air campaign followed by a post-war rebuilding effort. Instead, the United States “led from behind” on the NATO-led air assault and after Gaddafi fell, “we just walked away,” he said.

Crocker predicted that the group would wait out the strikes and hold off on threatening Arbil, instead shifting its attacks towards Jordan or Saudi Arabia.
“They’re going to start looking across borders,” he said. “They believe in the Saudi and Jordanian borders as much as they believe in the Syrian and Iraqi borders.”