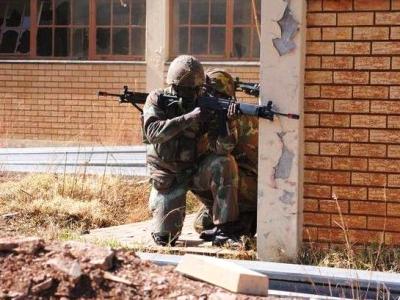 The South African Army has wrapped up a major two-week fighting in built-up areas (FIBUA) training exercise at an old gold mine in the North West Province. The exercise, to train infantry in street fighting and building clearance, involved troops from the elite 1 Parachute Battalion (1 Para Bn) as well as 21 SA Infantry Battalion and the Rand Light Infantry, a reserve unit.

Colonel Andy Mhatu, officer commanding 44 Parachute Regiment, said the deployment of 1 Para Bn to Burundi on peacekeeping duty in 2001 alerted them that FIBUA training was essential. Initial training took place in theatre and since about 2003, the unit has had a formal platoon-level learning programme. By 2009, the whole of 1 Para Bn was FIBUA trained. For them, this month’s exercise was annual continuation training.

A UN-Habitat report released late last year noted a third of Africa’s one billion inhabitants currently live in urban areas. By 2030 this will have grown to 50%. According to the report, the population of some cities is set to swell by up to 85% in the next 15 years. The most populous city in 2010, Cairo, will grow by 23% to 13.5 million people. By 2025, however, it will have been overtaken by both Lagos (15.8 million) and Kinshasa (15 million). The UN agency warned food and water shortages, poor infrastructure and a lack of housing are among the problems governments face during such rapid urbanisation.

Militaries have traditionally sought to avoid fighting in cities because the close terrain “absorbs” troops: it takes large numbers of soldiers to take and defend buildings. FIBUA is thus generally undesirable, as a brief look at history will show: some of the toughest fighting of World War Two was in urban areas such as Stalingrad, Warsaw, Manila, Berlin, and – for South Africans – in the towns of Italy. The trend continued post-war – the fighting in Hue City during the Tet offensive of 1968 in Vietnam was notoriously brutal.

Fighting is at short range and tends to be destructive, meaning casualties are often higher and wounds more severe. Urban layout, particularly streets and fences, tend to channel troops, exposing them to lethal direct and indirect fire. Buildings, drains, and other urban infrastructure also provide innumerable hiding places for snipers and boobytraps – even more so when damaged or demolished. It is also a battlefield congested with civilians among whom the opposing force – whether soldiers or insurgents – can hide. As buildings and infrastructure such a water, sewerage systems and electricity are damaged and destroyed in the fighting, health and hygiene deteriorates, further increasing losses to disease and infection. Civilians rendered homeless by the fighting will need accommodation, food, water, medical- and healthcare, placing further burdens on the military. Their plight can often affect morale.

Opponents in combat are always seeking an assymetric advantage over their adversary. Moving into
an urban environment may give this to especially the weaker side to a conflict. There they may find cover and concealment, intelligence, logistics, recreation, recruits and – in the case of insurgencies – popular support. Civilians can be used – willingly or otherwise – as human shields and this along with humanitarian and political considerations to limit damage to infrastructure can fetter the choice of support weapons available to troops as well as their employment. This is compounded by the propaganda value an opponent can derive from media images of tanks demolishing homes and mortar or artillery fire hitting markets.

Thus while few militaries want to fight in urban areas, the fact remains that they need the ability to do so or suffer the consequences. Major General Duma Mdutyana, the General Officer Commanding the Operational Headquarters of the Joint Operations Division of the SA National Defence Force added yesterday at an open day to showcase the infantry’s capability, that “one prepares for the worst case scenario and hope for the best.” Mhatu added that 1 Para Bn in 2008 approached the management of the President Steyn mine at Welkom to use part of their grounds for FIBUA training. This was then used for two years, but when the mine went into liquidation, the agreement lapsed. 44 Para Regt earlier this year scouted the Deelkraal mine complex near Carletonville and found its vast now-abandoned hostels and works buildings ideal terrain for FIBUA training.

Warrant Officer Class 1 Shaun Louw, the RSM of 1 Para Bn, noted the training is almost entirely practical, concentrating on obstacle crossing, scaling walls, physical training – mostly to strengthen the upper body – tactical movement between and in buildings and how to attack, clear and defend structures. Attention is also given to storm drains and sewers. The training is mostly drills, Louw, a qualified combat diver and Special Forces (SF) operator, added, with leadergroup and theoretical instruction done at the Infantry School in Oudtshoorn in the Western Cape. Mhatu added that Louw had developed many of these from the tactics, techniques and procedures used by the SF. Louw noted a major difference was size: the SF operated in small groups, while the conventional infantry would attack as companies and battalions. The doctrine was being finalised by writers at the Infantry School, he added.

The infantry’s 6 SAI air assault battalion and 9 SAI sea-landing battalion will next receive the training, which will gradually be rolled out to all units of the infantry formation, regular and reserve. FIBUA training will, in time, also include other formations, such as the engineers and artillery in both their primary and secondary roles.