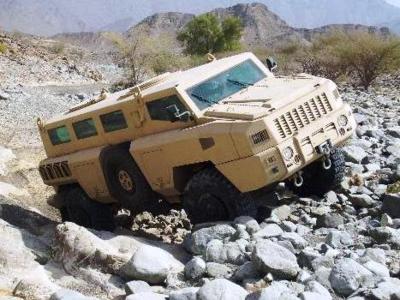 Kazakh Defence Minister Adilbek Dzhaksybekov on Wednesday announced the launch of the project in the capital Astana, which will see the production of 120 to 360 military and non-military vehicles a year. Production is expected to commence by 2015.

Work at the facility will include cutting and welding armour plates, vehicle assembly and quality control. Wheeled armoured fighting vehicles as well as commercial vehicles such as buses will be manufactured for both local and export markets.

Dzhaksybekov on Wednesday noted that Kazakh President Nursultan Nazarbayev stipulated that by 2020, some 80% of Kazakhstan’s military hardware should be supplied through domestic production.

The Kazakh defence ministry said this is the first such high-revenue joint venture in Central Asia and will see significant local investment, skills and technology transfer. At least 150 jobs will be created and 50 engineers trained.

Apparently the armoured vehicles that will be manufactured at the plant were tested by Kazakhstan’s armed forces in May and June this year.

Paramount Group Chairman Ivor Ichikowitz said: “It is a great privilege for Paramount Group to have been selected as the strategic partner to Kazakhstan Engineering Distribution for the establishment of this landmark facility in Kazakhstan. This is a very important milestone in the strengthening of ties between Kazakhstan and South Africa. The defence and aerospace industry is one of the most strategic areas of cooperation between nation states.”

Ichikowitz added: “It is our intention to establish a fully fledged armoured vehicle and land forces manufacturing facility to engage not only in manufacturing but also in Research and Development, for the production of an indigenous range of products that are ideally suited to Kazakhstan and other markets in the region. We believe that this strategic collaboration and our investment will support the industrial development of the country and boost the high-tech defence and aerospace industry.”

Miles Chambers, Business Development Director at Paramount said, “We are pleased to participate in this large project under which not only manufacture and assembling of the machines but also research and design work will take place. We will participate in the development of Kazakhstan’s defence capabilities through transfer of technology and investment of our own funds.”

Paramount has done business in the region before – for example, Paramount delivered 30 Matador and 30 Marauder vehicles to Azerbaijan’s armed forces.