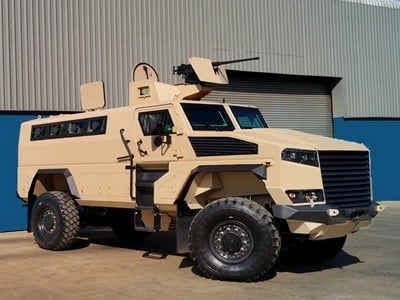 The company funded LM14 is a completely new design that was developed in response to a need for a cost effective solution aimed at the African market as well as the United Nations and South African National Defence Force (SANDF).

Development began on 26 January, with design and development being concluded in nine months. The first vehicle rolled out of the prototype shop on 16 September. At the moment LMT is busy with certification of the vehicle and will go into production as soon as a first order is received.

Vinesh Selvan, Head of Business Development at LMT, told defenceWeb that the market for the vehicle is of a significant size as there appears a genuine demand for low cost APCs and the company has already had some expressions of interest from certain parties.

The LM14 is a candidate to meet the South African Army’s Project Sepula to replace some of its aging armoured vehicles, particularly Casspirs and Mambas, although this project is currently stalled.

The LM14 carries eight troops in addition to a driver, commander and a gunner, with all ten having firing ports. Turrets can be mounted on top – at the moment the prototype is fitted with a manned .50 Browning machinegun mount on the roof. The vehicle is ballistically and mine protected.

In addition to armoured personnel carrier configuration, the LM14 is also offered in armoured ambulance and command and control configurations.

LMT developed three new vehicles (the LM8 special operations vehicle, LM13 Multi-purpose combat vehicle and LM18 Protected transport vehicle) for a country in the Middle East and is currently working on another two new vehicles. It is also doing some design work for countries in the Middle East.

LMT specialises in ballistic, landmine and improvised explosive devices (IEDs) protection and the integration of these protection technologies into armoured vehicles, and has the ability to design and manufacture mine-protected vehicles with amongst others, flat or semi-flat floor mine protection. Vehicles with this technology are generally lower and more spacious than vehicles with a conventional V-hull design and have a smaller profile.

Denel Group has a majority stake in LMT Holdings. The acquisition of LMT in 2012 expanded Denel’s range of vehicles and products, adding a capacity for mine-protected vehicles, hulls and cabs as well as product testing, simulations, maintenance and support of other products within the Denel Group.