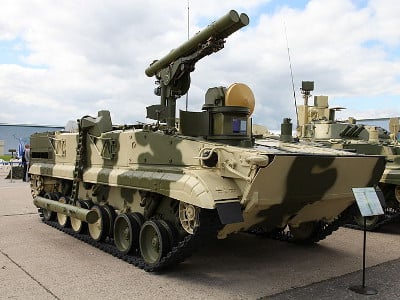 The Libyan Army has apparently received ten more 9P157-2 Khrizantema-S tank destroyers from Russia, adding to the four it received before the 2011 revolution broke out.

IHS Janes reports that ten of the tank destroyers arrived in Libya in a new consignment on September 24. The publication said that photos on the Libyan Army News Agency Facebook page showed soldiers posing with seven of the vehicles.

According to the Stockholm International Peace Research Institute (SIPRI), Russia delivered four 9P157-2 Khrizantema-S tank destroyers to Libya in 2010. Some of these were photographed being operated by Libyan rebels against pro-Gaddafi forces in 2011.

The Khrizantema-S is based on a modified BMP-3 chassis and features the 9M123/AT-15 Springer missile. The missile mounts are retracted into the chassis when not in use or when being automatically reloaded. The 9M123 missile can be either laser or radar guided and can carry a tandem HEAT or thermobaric warhead (9M123F). Guidance is through a roof-mounted millimetre wave radar or a laser designator mounted on the glacis plate. Range of the missile is approximately 6 km.

In addition to the two missiles mounted on the launcher, another 15 missiles are carried internally.

The Khrizantema-S system was originally developed by the KBM Engineering Design Bureau for the Russian Army, with service entry scheduled for around 2004, but due to budget constrains only a few were ordered. Libya is the only known export customer for the type.

An unknown number were ordered before the revolution that overthrew Libyan leader Muammar Gaddafi, who ordered $4 billion worth of hardware before the revolution, including Yak-130 trainers, tanks, fighters, helicopters and air defence systems. These contracts were reviewed by the new Libyan administration, as Russia did not support the uprising against Gaddafi.

Now that some Russian arms deliveries have resumed, it remains to be seen whether more Russian equipment will be delivered.