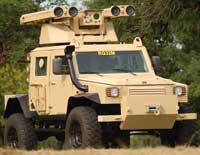 Missiles are normally fired from stationery positions, but the new turret adds mobility to the missile`s already long stand-off capability of 5km.

The turret can be used to launch Denel`s Ingwe long-range anti-armour missiles used by several military organisations in the Middle East and Africa, and is suitable for a wide number of military vehicles, according to Wessels.

The turret is controlled by an operator from inside the cabin of the vehicle, or if necessary, via a remote-control unit. The operator is assisted by a highly advanced weapon management system, including colour displays, supplied by IST Dynamics.

"The turret is fitted with a stabilised, day/night observation and sighting system that has impressive detection, recognition and identification abilities," says Wessels.

The system`s reconnaissance capability is augmented by various day and night cameras capable of different fields of view, allowing target recognition during the day at more than 6km and night-time recognition at 7.3km.

Wessels adds that the sight can be fitted with different thermal imagers based on specific client requirements. The sight is also equipped with Denel`s latest autotracker to minimise the risk of operator error during missile firings.