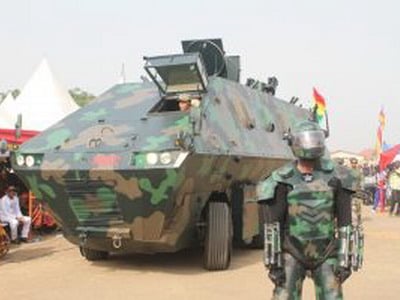 On 30 December, at the 38th annual Technology Exhibition of the Kantanka Group in Accra, the Kantanka Technological Centre of Excellence (KTCE) showed off a domestically-produced wheeled armoured personnel carrier (APC).

KTCE is part of the Kantanka Group of Companies, founded by Dr. Kwadwo Safo.

No specifications for the vehicle were included, though Ghanian media reported the vehicle came equipped with “a laser rangefinder.” Other products on display at the exhibition included military exoskeletons and civilian goods, like automobiles.

The Asantehene (absolute monarch) Otumfuo Osei Tutu II, as well as other important officials attended the exhibition. Otumfuo Osei Tutu II, who is the ruler of the Kingdom of Ashanti, praised the work of Dr. Kwadwo Safo and urged Ghanaian citizens to purchase products made in the country “if we really want to end the cycle of economic hardships that have bedevilled the country.”

Ghana in recent years has shown renewed interest in developing its local defence industry so as to produce more of the military’s needs. The production of the armoured vehicle thus represents a development milestone for the country’s industry.

No technical details of the vehicle have been released. The vehicle, with KAI802 APC written on the side, appears to be about four metres tall and 12 metres long. It has what appear to be smoke grenade launchers mounted on the hull, which has multiple hatches including a large one at the rear, and gun ports. It seems the design is based on a commercial truck, with relatively small truck-type tyres and low ground clearance.

A weapon that could have been either a cannon or a multiple grenade launcher was mounted on the roof of the vehicle.