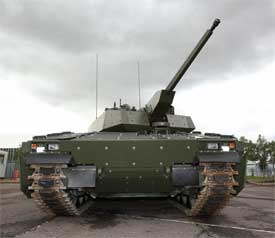 General Dynamics UK and BAE Systems have both submitted bids for the British Army’s next generation of reconnaissance Armoured Fighting Vehicles, a project that’s first phase is currently valued at £2 billion.
The General Dynamics (GD) team is offering a low-risk evolution of the ASCOD Infantry Fighting Vehicle, already in use with the Spanish and Austrian armies, for the Specialist Vehicle element of the Future Rapid Effect System (FRES SV).

GD says the ASCOD SV vehicle will have the best mobility in its class, with tremendous growth potential for optimum survivability for British troops against the threats of the future.

BAE Systems, meanwhile, is suggesting the “Scout” version of the CV90 for the “Recce Block 1″phase.
It says the Scout variant will give British troops a much-needed replacement for the ageing CVR (T) Scimitar, with greatly improved protection, firepower and reconnaissance abilities.
The UK Ministry of Defence has said it will select a winner in the first quarter of next year.

The BAE Systems contender for all the variants is based on the latest version of the CV90 chassis, now in service with six countries.

For the scout role, the chassis has been shortened and given a lower profile.

The company says it plans to minimise costs, meet the tight delivery schedule and align with the UK Armoured Fighting Vehicles (AFV) Strategy published in June by using a low-risk manufacturing approach proven with all five CV90 export customers.
“We will use a tried and tested model to ensure the UK MoD has access to the information it needs to ensure operational sovereignty,” says campaign director Arne Berglund.

The chassis will be built at the company’s existing production line at Örnsköldsvik in Sweden.

The Scout turret and UK mission fit of all variants will be integrated onto the chassis in the UK, preserving jobs and the key skills necessary to continue to support British Army operations.

BAE Systems has delivered well over 100 urgent operational requirements to modify vehicles in Iraq and Afghanistan, mostly to provide protection to crews against ever-changing threats.

The CV90 chassis has a mature supply chain, much of it already in the UK, and BAE Systems plans to increase UK content. The vehicle, turret technology and weapon system all have significant export potential.

Global Combat Systems managing director David Allott commented: “We are reshaping our business in line with the Armoured Fighting Vehicles Strategy. We are cutting costs, building our systems engineering skills and creating a more agile organisation to deliver FRES and Warrior upgrade. Our aim is to ensure a healthy, sustainable business which can continue to support UK land forces in training and on military operations.”

The BAE Systems candidate vehicle takes advantage of the best technology available today.
“With each new customer, the vehicle has made a significant evolution to meet the changing face of warfare,” says Berglund. “For instance, despite its relative light weight, our FRES candidate has mine protection comparable with main battle tanks weighing nearly twice as much. It has considerable growth potential, both physically and through its advanced electronic architecture.”

The open electronic architecture – essentially the vehicle’s ‘operating system’ –will allow ‘plug and play’ upgrades to electronic systems, improve battlefield communications and have training and logistics benefits, particularly if it is rolled out across the Army’s vehicle fleet.

BAE Systems has already spent more than £25 million – not including the weapon system – on developing an all-new British-designed turret for the Scout variant. It features sophisticated sensor systems and a revolutionary 40mm cannon.

The latter’s ease of use, ability to fire on the move, versatility and much-increased punch means that it will give a major improvement over the 30mm Rarden gun used in Scimitar.
Its 40mm high explosive round has more than three times the explosive power of the 30mm Rarden, while its armour-piercing projectile will penetrate more than 140mm of steel armour.

BAE Systems will submit its bid for a linked Warrior upgrade programme on November 18. It will feature a turret which has many similarities with its FRES offering, including the cannon, and the same electronic architecture.

The bids come days after a leaked report by Bernard Gray, a former senior MoD advisor on the state of defence procurement in the UK today.
Commissioned by the MoD, the report bluntly states that the British procurement process is so inefficient that it harms national defence.
Due to ineptitude Gray reportedly noted new equipment routinely cost 40% more than initial estimates and arrives five years late.
As a consequence, MoD equipment programmes are £35 billion over budget while troops have to make do with equipment deficiencies in a wartorn Afghanistan.