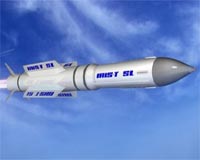 The company says all objectives were achieved during the ballistic test in the presence of representatives of the national customer: safe missile launch from a carrier vehicle; demonstration of the missile´s flight-mechanical and aerodynamic characteristics; operational performance of the newly developed rocket motor as well as controlled opening of the aerodynamic shroud.

The IRIS-T SL is a further development of the IRIS-T short-range infra-red guided air-to-air missile, a European cooperation programme currently in series production.

Seven European nations and Saudi Arabia also use the weapon, costly on the Eurofighter Typhoon II.

The missile´s further development for its surface-to-air role consists in a rocket motor upgrade, equipment with a data link as well as GPS-aided navigation.

The target spectrum ranges from aircraft and helicopters to unmanned aerial systems and missiles.

“Thus, the requirements for a modern guided missile for ground-based air defence have been implemented with a distinct increase in range,” a Diehl media release says.

Diehl adds that the IRIS-T SL is to complement the US Raytheon Patriot PAC-3 as secondary missile of the German MEADS programme.