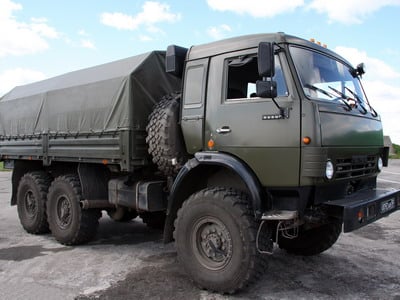 Russia’s Kamaz Trucks has delivered seven new Kamaz troop carriers of undefined configuration to Angola where they will be used by border security police units to prevent smuggling and illegal immigration along the border with the Democratic Republic of Congo.

The trucks were commissioned into service earlier this month by Lunda Norte Provincial Police Commander Gil Famoso Da Silva. The police commander said the trucks would be distributed to the 6th and 7th border patrol units to preserve ‘public tranquillity’ and stem illegal Congolese immigration.

In addition to the vehicles, two mobile water treatment and storage systems with a capacity of 5 000 litres each were received.

According to the Russian manufacturer, Kamaz offers standardised armoured military trucks which can be used for transportation of personnel, valuable cargoes and explosive material.

In 2014, Kamaz Export announced plans to set up a truck production and assembly line for its commercial and military truck range in Angola. However, there has been no update on the progress of the venture since then.

Russian companies have over the years been major arms suppliers to Angola, with recent deliveries including eight Mi-171Sh helicopters. The helicopters are part of a $1 billion deal signed between Rosoboronexport and Angola in 2013. This is believed to include 12 Su-30 fighter jets and spares for Mi-17 helicopters and other hardware already in service with Angola’s armed forces.

During the visit, Moskva fired a P-500 Bazalt (SS-N-12) anti-ship missile at a surface target, scoring a successful hit. According to the Russian Navy, the crew of Pytlivy also performed surface and air target artillery firing.