In the previous two blog posts we discussed some of the effects that could influence the sensitivity of a DF antenna system.  These were mostly related to the environment, and often manifests in a DF measurements as noise or interference which reduces the ability of the DF system to accurately estimate the angle of arrival.

In this blog post we will turn our attention the DF antenna itself, and consider a few of the factors that set good DF antennas apart from bad ones.  Welcome to the dark art of DF antenna design!

The first and obvious parameter to consider in a DF antenna, is the overall physical size.  The physical size of the antenna is more often than not determined by the specific application in which the DF antenna will be used, and hence there will necessarily be trade-offs in performance.  Antenna engineers are thus often required to design antenna arrays that fits within the physical constraints and still give the best possible DF performance.

As a very basic introduction on the effect of size vs performance in DF antennas, we will consider the physical spacing between elements in a DF array, and how they define the upper and lower working frequencies of the array.

Typical DF systems uses multiple antenna elements to detect a single incoming signal.  By comparing the differences between the voltages received by the individual elements, the direction of arrival can be calculated.  This only works, however, if the relative voltages received by the individual elements are different for signals arriving from different directions.

To illustrate the principle, let’s consider an incoming signal from two different directions, and using a two-element DF system.  In the first scenario, the antenna elements are 180⁰ apart (0.5 wavelengths) at the frequency of the incoming signal. 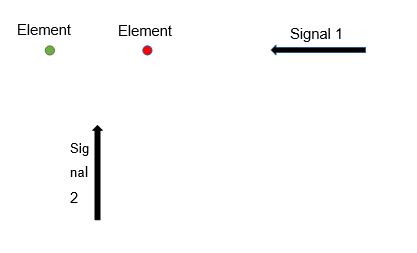 If we look at the two voltages received on element 1 and 2 respectively, when signal 1 is arrives, we would expect to receive the following voltage signals at the receiver.

We can see that there is a time shift between the two signals, due to the fact that the signal takes slightly longer to arrive at element 1 compared to element 2, when arriving from the right.

When the signal arrives from the bottom of our image (signal 2), the two elements receive the signal at exactly the same time, and they are thus on top of each other.

By measuring the time difference (or more correctly, the phase difference) between the signals arriving at the two element, we can thus establish which direction the signal is arriving from.  Typically at least three elements are needed, but this illustrates the principle.

When we double the frequency of the incoming signal, something interesting happens.  The physical distance between the elements stay the same, so the time delay between the signal arriving at the two elements are still the same.  The arriving signal, however, now completes twice as many cycles in that same time, and the voltages received at the two elements for the two signals for this scenario looks as follow.

We now see that the voltages at the two ports are exactly in phase, and as far as the receivers are concerned, these are identical signals, even though they are arriving from wildly different directions.  In this scenario, the DF system has no way of determining the direction of arrival, and the system will report a direction of arrival that is very wrong.  These types of errors in the estimation are called ‘wild bearings’, and are usually caused by the DF array being too large for the frequency of the signals being analyzed.

The upper frequency limit of a DF array is thus typically determined by the maximum inter-element spacing of the elements in the DF antenna array.

Let’s now increase the wavelength (i.e. lower the frequency) of the incoming signals.

While there is still a noticeable difference between the voltages received from the two signals, the difference is very small.  In the ideal case (first examples), the peak-to-peak voltage difference was about 2V, while it is not even 0.2V in this case.  If we are dealing with large incoming signals, this is not a problem, but the problem quickly becomes apparent when we add a bit of noise.

It is now clear that, depending on when/how the receiver samples the signal, it might be impossible to estimate an accurate direction of arrival.  In this scenario we can see that the accuracy of the system will be limited by the gain of the antenna elements (which is part of the DF antenna design) and the signal-to-noise ratio of the receiver system.

The lowest frequency at which the system can work for a given receiver system and required accuracy, will be determined by the physical size of the array and gain of the antenna elements.  Larger arrays and antenna elements will (within reason) provide the receiver system with larger signals to work with (due to higher gain) and more differentiation between signals arriving from different directions (due to the larger element spacing). We can often see these two effects manifesting in the sensitivity plots published in the brochure or technical reference manuals of DF antennas.  In the example above, the ‘bathtub’ curve of the band B antenna array of the DF-A0062 can clearly be seen, cause by effects discussed above.

Most DF antennas are designed to only work with signals of a particular incoming polarization, most often vertically polarized signals.  In reality, however, signals arriving from various sources rarely have a single, well-defined polarization and the DF system is thus presented with a signal that could have any random polarization.

Designing an antenna that is only sensitive to a single polarization is, unfortunately, much harder than one would imagine.  Any metallic surface, cable or mounting structure on the antenna that has a significant dimension in the opposite polarization from the elements, has the potential to receive part of the cross-polarized signal and leak the unwanted signal into the system.  It is not unusual for antenna engineers to spend more time finding and eliminating these sources of unwanted ‘stray signals’ than designing the actual antenna elements!

The image below shows just a small sample of the many places from where horizontally polarized (HP) signals can originate for a vertical polarized antenna like the DF-A0062. The design of the antennas used in DF systems are critically important in the overall performance of a DF system.  We looked at only two examples of the constraints and trade-offs that the antenna engineers at Alaris Antennas deal with on a daily basis, and there are many more similar and easily overlooked issues that can inadvertently slip into an antenna design that could influence the performance of the DF system.

As the technology used in radio and receivers ruthlessly marches forward, DF systems are expected to operate of wider frequency bands with more sensitivity than ever before.  To address these requirements from our clients, Alaris Antennas are continually looking for new and innovating ways of pushing the limits of what can be achieved in DF antenna arrays, and providing customized solutions that are designed to work well with the cutting edge technology used by our clients.