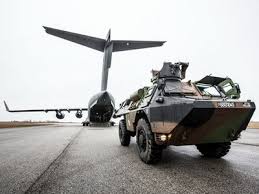 A crew from the Royal Air Force’s (RAF’s) Number 99 Squadron have been assisting French troops in sub-Saharan Africa by delivering supplies to the Operation Barkhane counter-insurgency efforts in Niger by C-17 Globemaster III.

The Aircraft delivered several pallets of cargo to Niamey airport in Niger, helping to keep the 3,000 strong French forces supplied during their ongoing efforts against Islamist insurgents, the Royal Air Force said on 10 February.

Operation Barkhane is a long-running French anti-insurgent operation that started in August 2014 with the aim of assisting the African G5 nations against terrorist organisations including Al-Mourabitoun, AQIM (al Qaeda in the Islamic Maghreb) and Ansar Dine.

In March 2016, during the UK-France Summit in Paris, UK Defence Secretary Michael Fallon announced the provision of monthly strategic airlift support in the form of C-17 flights picking up freight from France and delivering it to the sub-Saharan region.

The French force in Africa consists of around 4,000 troops operating alongside 200 armoured vehicles, 20 helicopters, six fighter jets and three unmanned aerial vehicles (UAVs) as well as logistical supply in-theatre being provided by two German C-160s. The main focus is in Mali, Chad, Niger and the Ivory Coast with some special forces in Burkina Faso with operations across the region being coordinated from N’Djamena and Niamey for supply and intelligence purposes.

Captain Guillaume Courot, Armee de l’air/French Air Force media representative in Niger said, “The fight against violent extremist organisations is an on-going effort that will require global collaboration if we are to succeed.”
“Op Barkhane is a prime example of two allied countries providing resources to maximum effect in the support of our allies in Africa through a mixture of medical, diplomatic, economic and military assistance.”

Flight Lieutenant Sven Meldrum, No. 99 Squadron pilot of Op Barkhane’s C-17, said, “The Op Barkhane tasking is tremendously important and highlights the importance of the RAF’s strategic heavy lift capabilities on a global scale. Working alongside the French on bi-lateral logistic capabilities reinforces the strong relationship we enjoy with them. It is extremely rewarding for us as operators and we continue to support our allies in this critical mission against sub-Saharan insurgency”.