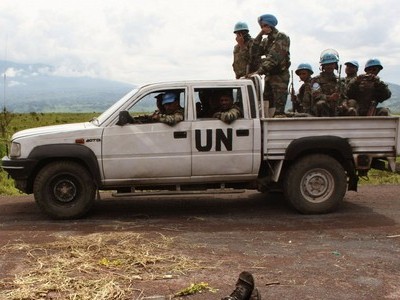 At the weekly MONUC press conference, it was announced by MONUC spokesperson Madnodje Mounoubai yesterday that the first MONUC military troops were deployed in Dongo in Equateur province (DRC), where a temporary operational basis is functional as well as in nearby Bozene.

According to Mounoubai, following consultation with the civilian and military authorities, MONUC took the decision “to sustain the joint PNC/FARDC operations aimed at re-establishing order and state authority in Dongo, Imesse and their surroundings.”

The 500 MONUC troops will come from the Ghanaian, Tunisian and Egyptian contingents as well as troops from the Guatemalan Special Forces which will be deployed on the ground. Military equipment such as armoured personnel carriers, transport and combat helicopters will also be at their disposal to support their mission.

MONUC’s Western Brigade will coordinate the support actions for the movements of troops on three axes: the north axis of Gemena-Mbari-Libenge, the central axis of Gemena-Bozene-Kungu-Dongo and the south axis of Mbandaka-Imesse, all along the Oubangui River.

MONUC is committed “to providing food rations for 1500 soldiers every five days and has already evacuated by helicopter 15 soldiers wounded at the front.”

In regard to the Human Right Watch report on the DRC published on 13 December last, and its demands among other things that MONUC stop its support to the FARDC in operation Kimia II, the Mission announced that the tasks it undertakes are determined by the Security Council.
“On the basis of the demand to operate together with the FARDC, the Department of Peacekeeping Operations (DPKO) solicited the opinion of the Office of Legal Affairs.

However on this subject the spokesperson underlined that a policy has been developed regarding the conditions in which MONUC would bring its support to the FARDC.
“The Mission won’t participate in operations, or won’t bring its support if there is a real danger that FARDC units violate or will violate human rights, international humanitarian law or the rights of refugees. It is also the reason for which the Mission suspended support to a very specific FARDC unit suspected to be implied in the targeted slaughter of civilians in the zone of Lukweti in North Kivu.”
“MONUC continues and will continue to assure the protection of civilians as its priority,” he concluded.

The UN Office for the Coordination of Humanitarian Affairs (OCHA) and the representatives of MONUC’s Civil Affairs division were part of a delegation that visited Dongo recently. From a humanitarian point of view, they noted that:
– The security situation has improved on the Gemena-Bozene-Kungu-Dongo axis
– The population has fled the rebels and their own villages (by crossing the river other or taking refuge in and around Gemena)
– Humanitarians are ready to assist, but to do this they must go on mission on the ground from Gemena to evaluate the changing humanitarian situation
– MONUC’s substantive sections are preparing supporting actions for: the access of humanitarian aid; the prevention of possible violence committed by the FARDC when the populations return; and of mediation.
– The Dongo mission had meant a revision of the security rules – in progress – (security clearance), for the launching of complementary activities between the soldiers, the civil sections and the humanitarians.

Following this visit there, OCHA must propose a mission plan with MONUC’s Civil Affairs and Security divisions, in order to coordinate road and aerial escorts for upcoming missions.