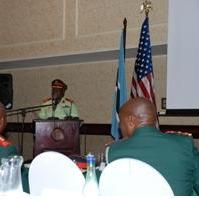 HIV and Aids are not simply a health problem, with social and economic implications, it is also a national security concern.
That is the view of US Africa Command Director of Programs Dr. Ray Kirkland at this week`s military HIV/Aids prevention conference in Gaborone, currently underway.
Africom reports the conference that kicked off Monday is being attended by approximately 150 participants from 26 African countries and 18 local and international non-governmental organisations.
The conference is sponsored by the Botswana Defence Force in collaboration with the US Embassy and the US Department of Defense HIV/Aids Prevention Program. It ends tomorrow.
Conference objectives are to identify and share best practices in military communities for HIV prevention including structural, behavioral, and bio-medical approaches to prevention; understand the barriers and identify solutions to implementation of international HIV prevention problems; and to adapt and plan to use relevant information for operational military use.
In his opening remarks Botswana Defence Force deputy commander and Air Arm commander Major General Gobuamang Jefferson Tlhokwane underscored the danger of HIV/Aids in society and the negative perception of elevated HIV/Aids rates in Africa: “HIV/Aids is more deadly than the weapons which are at our [military] disposal,” he stated, “and prevention efforts and the manner in which they can be successfully accessed by our forces should be the focus of our intervention.”
“We and our friends, including researchers and scientists, should be able to correct these HIV/Aids figures in Africa. In Botswana, we hold the view that anything above zero is a cause for concern. We have passed the denial stage and hope other African nations do the same.”

The risks faced by national forces are often recognisable in advance, to include the stress of deployments and associated use of alcohol. Another complication he identified is the relegation by many African militaries of HIV/AIDS program implementation to force medical departments without significant command involvement.

Makumbi spoke frankly about the challenge faced by the Ugandan Peoples Defence Force in regard to the prevalence of HIV/AIDS. “We in Uganda have been open about this issue,” he commented. “On recruitment, we screen all our trainees, and the prevalence rate is similar to that in the civilian populace, approximately six percent. By the end of one to two years, when we test again, we find that the prevalence rate in the force has risen. And yet, as a military, we are the disciplined and organized people.”

In regard to leadership involvement at the strategic level, Makumbi stressed the need for senior leaders to strive to influence policy at the national level to address the need for HIV screening of recruits, as well as to develop comprehensive, specific military workplace policies for HIV/AIDS testing.

Looking ahead, Makumbi stated that good policies and directives alone are not enough, but that these policies and directives must translate into action. Leaders must be actively involved, must know and appreciate the threat posed by the HIV/AIDS threat to the nation’s security, and must clearly define their target populations for implementing HIV programs.