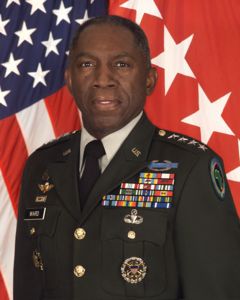 Nigeria’s emergence on the US State Sponsored Terrorism list has not gone without official criticisms and ultimatums from Africa’s most populous state. Claims over a possibly “rushed” United States directive, in the wake of a terrorist attempt on a plane carrying 284 people, have been rife.

What influenced this crucial decision that affects a country of 150 million people? Was the decision only influenced by the mad act of one British educated and radicalized Nigerian?

General William Ward, in charge of Africom, US-Africa military mission and therefore expected to be much aware of security issues on the continent, is seemingly “not aware” of the reasons why Nigeria was put on the list.

Questioned to this effect by Afrik.com during a press conference given on Wednesday in Paris, France, General Ward indicated that he is “aware that this just happened”.

However, the US-Africa security specialist categorically stated that he is “not prepared to render a thought on that”, i.e., what is happening on the ground in Nigeria, a country he is familiar with.

Conversely, the top US official talked extensively about the situation in many African countries, like Somalia and Guinea and the challenges they face, including extremism and narcotic drugs, respectively. Although the Sahel region was of particular interest, General Ward also expressed his views on the Horn of Africa, Uganda, Democratic Republic of Congo…?
… and Nigeria

Their presence in crisis areas has enabled Africom come to terms with some of the fundamental security issues facing those African nations who “invite” them to help find long-term solutions. A recent Africom operation sought to help curb Sierra Leone’s problems with illegal fishing activities.
“The activities continue and they continue in various locations. Kidnappings occur in the Sahel. Nautical trafficking is occurring in the West Coast of Africa. We see evidence of this moving to the east coast of Africa as well. We see activities of extremists and terrorists occur in North Africa. We see, off the coast of the Horn (of Africa, ndlr) the acts of piracy continue.”

They are “centres of action or activity that we have to pay attention to. Somalia, with its vast areas (and) ungoverned spaces, provide areas that permit extremism to be facilitated,” the General said. And rightly so, being on the ground, it would be logical to analyse, in a more pertinent manner, the challenges that face these territories and deal with them accordingly. “Those areas are super-highways” where “terrorists, violent extremists and criminals act unchecked,” he continued.

Despite the US top official’s open description of what is happening on the ground in difficult areas of Africa and faced with the reality of al-Qaeda cells and their relationship with al-Qaeda, for which he “takes them at their word”, he was adamant on the whole subject of Nigeria or the possible threat it poses.
“It is not a matter what I think, at this point in time, it is decisions that are made (…) policy decisions. I do not get involved in the policy business,” he admits. Politics, if the General’s statement is scrutinized, overrides ground observation in what concerns Nigeria. “The characterizations on the ground remain policy issues,” he says.

Nigeria, a success?
“We remain a command that works with partners on activities they ask us to do. We go where we are invited to go,” the General assures. And Nigeria is among a few strategic African countries that have invited Africom to work closely with its forces.

In fact, some of the characterizations on the ground in Nigeria were mentioned in General William Ward’s Africom address to the American Senate, last March.

That “Military Information Support Teams, in conjunction with DOS public diplomacy, have demonstrated success in several countries including Nigeria.

That “In July 2008, exercise AFRICA ENDEAVOR 08 in Nigeria improved communications and information systems interoperability between US and African partner nation militaries.

That, “US Africa Command has partnered with several countries in West Africa to develop plans to counter regional threats. In Mali, Niger, Senegal, and Nigeria, the Trans-Sahara Counter-terrorism Partnership (TSCTP) and its military element, Operation ENDURING FREEDOM-TRANS-SAHARA (OEF-TS), are the US lead programs in countering violent extremism in the Sahel.”

Although General Ward explains that he is not “an African policeman”, Africom’s role in assessing, training and helping local military units to fight extremism, and the underlying principle that, as a top security official for the region, he should be conversant with security issues on the ground and therefore be able to talk openly about Nigeria, as he did in the case of countries that have invited Africom, should not be written off lightly.

Considering the consequences the US directive holds for “150 million people because of the behaviour of one person,” to quote Nigeria’s Information Minister, Dora Akunyili, who spent his formative years abroad, many believe the decision was rushed.

The Nigerian government has, in the meantime, issued the Obama administration an ultimatum to remove its name from the terror list.