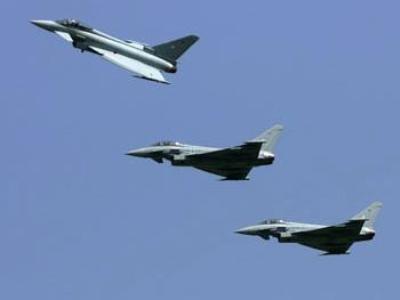 Western jets pounded targets in southern Libya on Thursday but failed to prevent government tanks re-entering the western city of Misrata, whose main hospital was besieged by armour and government snipers. Western commanders hope rebel forces in eastern Libya will overthrow Gaddafi, but the return of tanks to Misrata under cover of darkness highlighted the difficulties they face in trying to force the Libyan leader to cease fire.

Rebels, who have set up an alternative government in their eastern stronghold in Benghazi, say they needed more ammunition and anti-tank weapons if they are to end Gaddafi’s 41-year rule. “We need arms and ammunition. This is our only problem,” rebel military spokesman Colonel Ahmed Bani told a briefing. France, Britain and the United States have led enforcement of the Libya no-fly zone imposed last week by the U.N. Security Council, which authorised “all necessary measures” to protect Libyan civilians against Gaddafi’s forces.

British Tornado aircraft launched missiles overnight at Libyan military vehicles which were threatening civilians in the eastern frontline town of Ajdabiyah, 150 km (90 miles) west of Benghazi, the Ministry of Defence said on Friday.

Differences over the scope the U.N. resolution gave for military action against Gaddafi’s army led to days of heated arguments within NATO about its role in the operation. Turkey has wanted to be able to use its NATO veto to limit allied operations against Libyan infrastructure and avoid casualties among Muslim civilians from coalition air raids. France argued NATO’s command structure should run day-to-day military operations, leaving political control with an ad hoc steering group of coalition members, including the Arab League.

Paris argued having NATO in full charge would erode Arab support because of U.S. unpopularity in the Arab world. After four days of argument NATO ambassadors in Brussels reached a deal of sorts.
“At this moment, there will still be a coalition operation and a NATO operation,” NATO Secretary-General Anders Fogh Rasmussen told reporters. The alliance’s mandate did not go beyond enforcing the U.N. arms embargo and no-fly zone, he said. A UK government spokesman said NATO’s decision “to assume command and control of the no-fly zone, in addition to the arms embargo already being enforced, is a significant step forward.”

The UAE’s decision to contribute 12 planes to the operation was evidence of the “real and tangible” Arab role, he added. NATO officials said a decision was expected on Sunday on whether to broaden the mandate to allow it to take command of all military operations and attack ground targets in the oil-producing country, in order to protect civilian areas threatened by Gaddafi’s forces. Earlier, Turkish Foreign Minister Ahmet Davutoglu had told reporters: “The operation will be transferred completely to NATO and there will be a single command and control.”

The United States, embroiled in Iraq and Afghanistan, is keen to step back and play a supporting role in Libya, preserve alliance unity and maintain the support of Muslim countries for the U.N.-mandated intervention. U.S. Secretary of State Hillary Clinton said military planners had been authorized to take on the “broader civilian protection mission” and NATO was well suited to do so.

The number of U.S. aircraft flying missions had dropped significantly as other nations increased their role, she said.

U.N. Secretary General Ban Ki-moon told the Security Council there was no evidence Tripoli was complying with U.N. resolutions. His special envoy to Libya had warned Gaddafi’s government of possible “additional measures” if Libya failed to comply with its ceasefire demand.

The Libyan government denies its army is conducting any offensive operations and says troops are only defending themselves when they come under attack. State television said Western jets struck military and residential areas of the capital Tripoli for a sixth straight night on Thursday, prompting bursts of anti-aircraft fire. Western air strikes earlier in the day destroyed government tanks outside Misrata, some 200 km (130 miles) east of Tripoli, but other tanks inside the city were not hit, a resident said.

Gaddafi’s tanks slipped back into the city on Thursday and shelled the area near the hospital, residents and rebels said. Government spokesman Mussa Ibrahim said Libyan forces were in control of the city of 300,000 people, with only a hard core of rebels holding out. But opposition spokesman Abdulbasset Abu Mzereiq said by telephone that rebels were still fighting there, and had killed 30 snipers who had been picking off civilians from rooftops in the town. Government warships had left the port. Rebels and besieging government forces continued to clash around Ajdabiyah, said Abu Musab, who left the town by car with his family of 10.