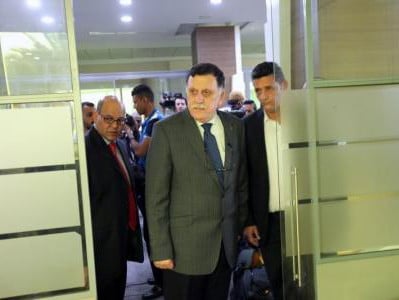 Libya’s UN-backed government said on Wednesday it would continue seeking approval from the parliament based in the east of the country, despite members of the assembly voting to reject the fledgling administration.

The Government of National Accord (GNA) is trying to unite a multitude of rival factions that have divided Libya since the downfall of Muammar Gaddafi in 2011 and getting the support of the eastern parliament is a key part of that jigsaw.

But the House of Representatives (HOR), which was driven out of Tripoli in 2014 when an armed alliance took control of the capital, has held out, with opponents of the GNA accusing it of depending on Islamist-leaning armed groups that oppose eastern commander Khalifa Haftar and forces loyal to him.

On Monday, GNA opponents staged a vote in the HOR after months of postponements. Pro-GNA lawmakers, many of whom did not vote or were not present, said the vote was unannounced and unconstitutional.

The GNA urged the assembly to reconvene “after the completion of the formation of the government”, an apparent reference to the pending replacement of four eastern ministers struck off the cabinet list for not taking up their posts in the capital.

After Monday’s vote, GNA Prime Minister Fayez Seraj wrote to the head of the HOR saying the four ministers would be replaced soon and the current cabinet list “is not considered final”, according to a letter leaked to Libyan media.

From 2014, Libya had two competing sets of parliaments and governments after the internationally recognised HOR relocated to the east.

Under a UN-mediated deal, the GNA arrived in Tripoli in March and largely displaced the former government.

But the HOR is meant to continue as the national legislature and its support is crucial if the GNA is to extend its authority to the east and re-unite a country riven with armed factions, including the presence of Islamic State.

In Wednesday’s statement, the GNA’s leadership, or Presidential Council, “requests that the House of Representatives convene a session for the adoption of the government, which it intends to submit.”

Until then, “the Presidential Council and its proposed ministers of the Government of National Accord will continue their work,” it said.

It also renewed a call for two Council members aligned with eastern factions to end their boycott of the GNA.