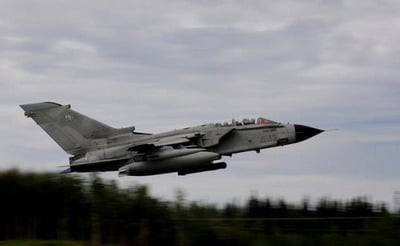 Italy, which has been playing a limited role in NATO operations in Libya, decided yesterday that its air force will be allowed to bomb selected military targets in the former Italian colony.

The surprise decision immediately opened a fresh crack in Prime Minister Silvio Berlusconi’s government, with a minister in a key coalition party, the Northern League, saying he strongly opposed it. Other League officials also dissented.

Italy was one of Libyan leader Muammar Gaddafi’s best friends in Europe until his violent suppression of an uprising prompted the U.N. Security Council to pass a resolution authorising the use of force to protect civilian lives.

A statement from Berlusconi’s office said he had informed U.S. President Barack Obama in a telephone conversation of the government’s decision, and that he would call other European leaders to tell them personally as well.

It said the government had decided to “increase the operative flexibility of its aircraft with actions aimed at specific military targets on Libyan territory with the aim of protecting the civilian population”.

Rome has made several air bases available for NATO forces and has contributed eight aircraft to the Libya mission.

But until now only it has taken part only in reconnaissance and monitoring of the U.N.-mandated no-fly zone rather than attacks on military infrastructure, which have principally been carried out by Britain, France and the United States.
“We have already done enough by offering the bases and logistical support and anti-radar activity,” said Roberto Calderoli, minister for legislative simplification.

He said that, if Italy’s allies wanted Rome to do more in Libya, they should help Italy turn back illegal immigrants and take some of the migrants from north Africa who land in southern Italy.

Italo Bocchino, a parliamentarian from a group that split with Berlusconi’s party, said Calderoli’s breaking of ranks was a precursor to a government crisis. Calderoli denied this, saying the League would convince other parties it was right.

Just 10 days ago, Defence Minister Ignazio La Russa said Italy would not order its aircraft to take part in military operations, despite pressure from Britain and France for NATO allies to contribute more to the air operations against Gaddafi’s forces.