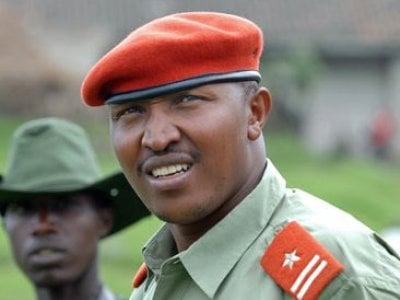 A Congolese warlord known as “the Terminator” who is accused of murder, rape and other atrocities arrived at the International Criminal Court’s jail in the Netherlands early on Saturday, the court said.

Bosco Ntaganda, who walked off the street and gave himself up at the U.S. Embassy in Kigali in a surprise move on Monday, was flown in a private jet from the Rwandan capital to The Hague after being handed over to the court’s custody.

After a 15-year career that spanned a series of Rwandan-backed rebellions in the east of the Democratic Republic of Congo, he will appear in court on Tuesday for the first hearing in a process that could lead to him being put on trial for war crimes.

Ntaganda was most recently a commander in the M23 rebel movement, but his position weakened after the group split in two.

His removal from the conflict creates an opportunity to secure a peace agreement to end the year-old rebellion in a region dogged by conflicts.

Ntaganda’s surrender was the first time an ICC suspect had voluntarily handed themselves over to be in the court’s custody.

He asked stunned U.S. officials at the embassy to be transferred to the court, where he will face charges of recruiting child soldiers, murder, ethnic persecution, sexual slavery and rape during the 2002-3 conflict in northeastern Congo’s gold mining Ituri district.

His whereabouts had been unknown after hundreds of his fighters fled into Rwanda or surrendered to U.N. peacekeepers last weekend following their defeat by a rival faction of M23 rebels in the mineral-rich eastern Congo.
“Bosco thought his choice was the ICC or probable death,” said Jason Stearns of the Rift Valley Institute.

Foreign Minister Louise Mushikiwabo said Ntaganda flew out of Kigali in the custody of ICC officials following cooperation between the Rwandan, U.S. and Dutch governments.

A Reuters witness had seen a blacked-out U.S. Embassy vehicle under police escort drive along the perimeter of Kigali international airport. Shortly after, a private jet took off.

His first courtroom appearance, to confirm his identity, will be on Tuesday morning, the court said in a statement.

With an arrest warrant hanging over him, Ntaganda and his backers were seen as an obstacle to peace between the M23 and the Congolese government that the rival faction had shown signs of warming to.
“Bosco’s arrest won’t bring peace to the eastern Congo, but Bosco’s arrest does spell a victory in the battle against impunity and the dismantling of one of the barriers to a peace process in the country,” Stearns said.

The trial of Rwandan-born Ntaganda could prove an embarrassment to the Rwandan government, which has denied charges by a United Nations panel that it backs the M23 rebels.

Wars in Congo have killed about five million people in the past decade and a half, and many eastern areas are still afflicted by violence from a number of rebel groups despite a decade-long U.N. peacekeeping mission.
“Bosco Ntaganda’s arrival in The Hague will be a major victory for victims of atrocities in eastern Congo,” said Geraldine Mattioli-Zeltner, international justice advocacy director at Human Rights Watch.