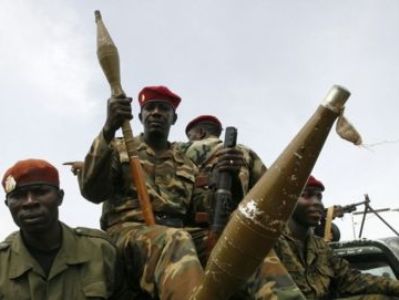 Angola will begin withdrawing its troops from Guinea Bissau next week, an Angolan official said denying reports the mission’s departure from the coup-stricken state would be delayed indefinitely.

The withdrawal of the roughly 270-strong force could ease tensions in the country after Bissau soldiers seized power in April and accused Angola of having had a secret pact with the ousted government to destroy its military.
“It will be between June 2 and June 10,” the official said. “There is a ship on the way and there will also be four planes arriving from Luanda to help with the withdrawal,” he said, asking not to be named, Reuters reports.

West African regional bloc ECOWAS had said the Angolan force was meant to leave on May 30, and a Guinea-Bissau military source said on Wednesday the Angolans had delayed their departure “indefinitely”.
“This is simply not true,” the Angolan source said.

The Angolan mission has been in Guinea-Bissau – staying in a hotel in the capital – since early 2011 and was charged with helping reform the country’s military after a string of coups since independence from Portugal in 1974.

Guinea-Bissau is a hub for narcotics trafficking between South America and Europe, and the United States has named two of its top military officials ‘drugs kingpins’.

Angola announced it would withdraw its force days before an April 12 coup that derailed an election process and forced the poll’s front-runner, former Prime Minister Carlos Gomes Junior, and some of his allies to flee the country.

The junta said Gomes Junior, a vocal supporter of efforts to reform the military and combat cartels using the tiny country as a cocaine transhipment point, had a deal with Luanda to “annihilate Guinea-Bissau’s armed forces”.

Gomes Junior, who was briefly detained in the coup, went into exile in Portugal, but has said he wishes to return to Guinea-Bissau to rule.

Some of his allies: former army chief of staff Jose Zamora Induta, former interior minister Fernando Gomes, and former election commission chief Desejado Lima Dacosta, fled to Gambia where they have been arrested.

ECOWAS mediated a deal with Guinea-Bissau’s Military Command, which the regional group and the U.N. says is still run by armed forces chief Antonio Indjai, that paved the way for a civilian transitional government to take back power in mid-May.

The Military Command said it had deposed Indjai.

ECOWAS has also deployed to Bissau a 600-strong force, made up mainly of Nigerians, that is charged with overseeing a transition to new elections within 12 months, and eventually with taking over the security sector reform role played by the Angolan troops.

The CPLP grouping of Portuguese-speaking countries and the United Nations have expressed frustration over the ECOWAS deal, saying it does not adhere to a ‘zero tolerance’ policy for military coups.

Western diplomatic sources said the ECOWAS deal has rewarded the coup leaders with the removal of would-be president Gomes Junior and may reflect a rivalry between Angola and Nigeria for influence in the tiny country, which has rich bauxite deposits and possible oil offshore.