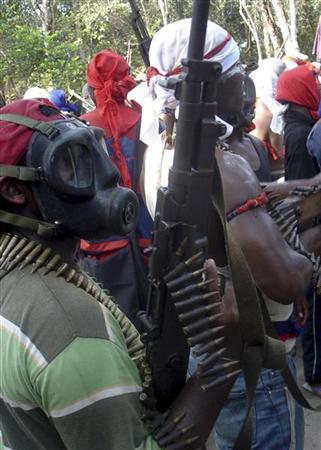 Nigeria’s main militant group should rethink its threat to resume attacks on the OPEC member’s oil industry and instead lay down its weapons and accept an amnesty, a government official said.
The Movement for the Emancipation of the Niger Delta (MEND), responsible for attacks that have wrought havoc on Africa’s biggest oil and gas industry, said on Saturday it would resume its campaign of violence on September 15.
MEND, which declared a 60-day ceasefire in July to allow for peace talks, said it had suspended negotiations with the government, Reuters reports.
“They (MEND) should reconsider their stand and join the amnesty boat because the boat is about to sail,” said Timiebi Koripamo-Agary, spokesperson for the presidential panel on amnesty.
President Umaru Yar’Adua offered an unconditional pardon in June to all militants who take part in the amnesty, the latest effort to stem unrest which has prevented Nigeria from pumping much above two-thirds of its oil capacity in recent years.
The amnesty programme officially ends on October 4.
MEND, a loose coalition of militant groups, has denounced the scores of rebels that have surrendered their weapons and taken up the amnesty.
Hundreds of militants handed over machine guns, rocket launchers, mortar bombs and gunboats in a public ceremony in the Bayelsa state capital Yenagoa on Saturday.
“You cannot wish away what happened in Yenagoa over the weekend,” Agary said. “(MEND) says they will resume hostilities by September 15. Let’s wait and see.”
Experts warned that the government must deal with the split between militant groups or face a possible resurgence in violence.
“We are heading for disaster if the government does not go back to the drawing board and redraw the entire exercise,” said Anywakwee Nsirimovu, director of the Institute for Human Rights and Humanitarian Law.
Some security analysts expect the military to launch another major offensive against militants who do not accept the amnesty once the 60-day offer period ends in October.

But Agary said there was no such threat and that there was still time for peace talks.