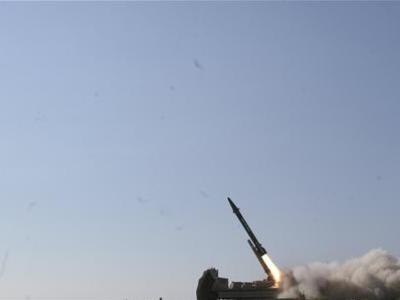 Iran showed off new missile and satellite technology, and told its enemies it had “complete domination” of the entrance to the oil-rich Gulf.

As part of Iran’s annual revolution celebrations, a time traditionally marked by new technological and military advances, President Mahmoud Ahmadinejad unveiled locally-made satellites while a senior commander showed off mass produced missiles.
“We should reach a point where we will be able to provide our knowledge and technology in the aerospace field to other countries,” Ahmadinejad said in a speech, unveiling the satellites he said were for scientific purposes, and showing film of a satellite-carrier rocket, Reuters reports.

Although Iran is not engaged in any military conflict, it is on constant alert against possible attacks from the United States and Israel which have not ruled out possible pre-emptive strikes to stop Tehran getting nuclear weapons.

Iran says it has no intention of making nuclear bombs and that its atomic programme, which is the subject of U.S., European and U.N. sanctions, is entirely peaceful.

In 2009, Iran launched a domestically-made satellite into orbit for the first time, a step that increased the West’s fear that the Islamic Republic is seeking to build a nuclear bomb and missile delivery systems.

The chief commander of the Revolutionary Guards, Mohammad Ali Jafari, said the new mass-produced missile would be able to target enemies at sea.
“Its speed is three times greater than the speed of sound and it cannot be traced and deactivated by enemies,” official news agency IRNA quoted Jafari as saying.

Another Guards commander, Ali Fadavi reiterated Iran’s threat to close the Strait of Hormuz, the narrow channel through which 40 percent of the world’s seaborne oil trade passes.
“The Persian Gulf and the Strait of Hormuz are under the complete domination of the Revolutionary Guards … and it would be blocked in case of a threat,” he said, according to the semi-official Mehr news agency.

Foreign analysts say Iran would be reluctant to take such a drastic step as it would cut off its own oil exports.