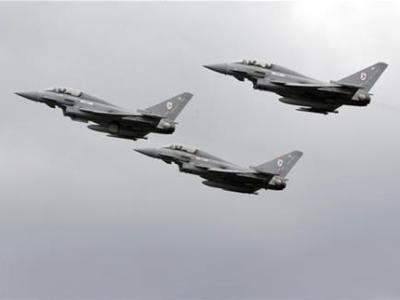 Ministers and defence contractors will push to win arms deals with foreign states at a trade fair next week, as part of a drive to grow exports and repair the nation’s economic prospects.

The Defence & Security Equipment international (DSEi) show, which takes place in London from Tuesday, is one of the world’s largest military shows and expected to attract more than 20,000 arms dealers from around the world.

The U.S. defence department is cutting at least $350 billion (219 billion pounds) from previously projected spending, and additional cuts could kick in if Congress fails to find more deficit reductions by year-end.

Britain is banking on growing defence exports to emerging markets to boost a flagging economy a year after it slashed its own defence budget 8 percent to help reduce its deficit — cutting its army, navy and air force.
“Exports are critical to a sustainable recovery,” Gerald Howarth, Minister for International Security Strategy said at a DSEi launch event earlier this week.

Defence exports topped 6 billion pounds in 2010 — second only to the United States — with the government keen to seal deals to supply part-British Eurofighter Typhoon jets to India and Oman.

British and U.S. arms suppliers have been battling to win new business in emerging defence markets, even including China and Russia, as they look to offset belt-tightening in home markets.
“Defence companies are already positioning for long-term budgetary headwinds, while shorter-term risk is heightened by the U.S. government’s deficit reduction plan,” said Investec analyst Andrew Gollan. “Defence remains a difficult market.”

Britain has also been pushing defence exports. Business secretary Vince Cable has led trade missions to Brazil and India over the last year.

BAE Systems, Europe’s largest defence company, will be displaying its high-tech wares, including an ‘invisibility cloak’ that can help tanks, warships and helicopters escape detection by infrared and other surveillance methods.

Unmanned aerial vehicles (UAVs) were also expected to attract a deal of interest. Analysts expect the UAV market to double to around $6 billion by 2020.

Potential opportunities in Libya could also be in the spotlight. Russia had billions of dollars worth of arms deals under deposed leader Muammar Gaddafi, which are now in doubt.

Russia’s arms-exporting monopoly Rosoboronexport recently said it may have lost $4 billion in existing and potential deals with Gaddafi’s government.

This year’s DSEi follows reports that Middle East and north African governments have used British weaponry against democracy protesters. A range of NGOs and local action groups have announced a wave of protests next week in opposition to DSEi.

Over the past two years Britain has exported military equipment to several countries in the Middle East and north Africa, which have experienced civil unrest, according to cross-departmental committees on arms export controls.

The report showed that since 2009 export licences were approved for the sale of machineguns to Bahrain and Egypt, small arms ammunition to Syria and sniper rifles to Saudi Arabia.