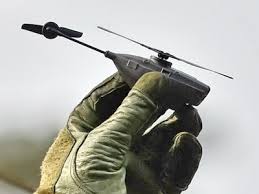 Desert Wolf now has the license to market the PD-100 Black Hornet 2 nano unmanned aerial vehicle (UAV) in South Africa, and will carry out the first product demonstrations at the end of March.

The PD-100 was manufactured by Norway’s Prox Dynamics, but the company was acquired by FLIR Systems in November last year for $134 million. Prox Dynamics specialised in extremely small, covert and light aerial sensors, with its flagship being the Personal Reconnaissance System (PRS) featuring the Black Hornet UAV and controller.

The pocket sized and hand launched UAV uses FLIR’s Lepton micro thermal camera, visible spectrum cameras, and proprietary software for flight control, stabilization, and communications. FLIR describes the Black Hornet UAV as one of the lightest, stealthiest, and safest drones on the market, and ideal for military forces and special operations forces.

Weighing 18 grams, the Black Hornet helicopter can fly for up to 25 minutes at line-of-sight distances of up to one mile at speeds of 18 km/h. It uses GPS navigation or visual navigation via video and can fly pre-planned routes via its autopilot.

As Desert Wolf is FLIR’s agent and representative in Southern Africa, it is marketing the Black Hornet 2 as part of its FLIR responsibility. “Since the Black Hornet became known a few years ago, there has been keen interest but South Africa could not get licenses,” according to Hennie Kieser, Managing Director, Desert Wolf Consulting.
“At IDEX in Abu Dhabi we were informed that South Africa can now apply for licenses. At this stage we will only sell to military and police units but are in discussions to get licenses for rhino farmers and other customers,” Kieser stated. “South Africa has very serious riot problems all over the country. With the Black Hornet nano drone our police and security agencies will have a safe and very capable tool available.”

The Black Hornet was developed in 2007 and been used by NATO forces in Afghanistan from 2011, with the United Kingdom military the first to acquire the type and use it operationally. It has also been evaluated by the US military and Australian army. Its small size and electric motors make it a stealthy reconnaissance tool for militaries and law enforcement agencies.