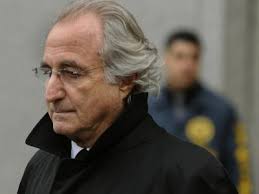 Bernard Madoff, the financier convicted for Wall Street’s biggest investment fraud, was surprised his $65 billion (R511 billion) Ponzi scheme was not uncovered sooner, he said in his first interview since entering prison.
The disgraced 71-year-old Wall Streeter, who drew 150 years’ prison time for the fraud, expressed remorse and talked candidly to a pair of lawyers suing him on behalf of investors, according to news reports of their jailhouse meeting, Reuters reports.
San Francisco attorneys Joseph Cotchett and Nancy Fineman met with Madoff at the North Carolina prison where he was taken two weeks ago after pleading guilty, the Associated Press and ABC News reported yesterday.
“There were several times that I met with the SEC and thought ‘they got me,'” Madoff told Cotchett and Fineman, according to abc news.com.
The Securities and Exchange Commission is now conducting an in-depth review of how they missed the fraud, drawing intense criticism. The results of their investigation are expected to be released in weeks.
Cotchett and Fineman represent about a dozen investors who lost money in Madoff’s decades-long scheme, an unprecedented global scam for which Madoff eventually pleaded guilty to laundering, securities fraud and perjury.
“It was an extraordinary visit. He was very candid, very open, and answered every one of our questions,” Cotchett said of the 4-1/2-hour meeting.
He was “very remorseful” but looked healthy and appeared to be working out, Cotchett told the news outlets.
“I think he’s not too happy to be where he is but he’s certainly not complaining,” said Cotchett, who set up the interview through Madoff’s attorneys.
The visiting attorneys said they planned to use what they learned at the meeting in a lawsuit to be filed this week in Manhattan against Madoff and his brother, Peter Madoff, who acted as chief compliance officer, and potentially officers at some of the feeder funds that worked with Madoff, according to the reports.
Madoff said he believed securities investigators had found all the money that could have been recovered, Cotchett said in the news reports.
“But it might be in many different venues, and by that I mean I don’t think that Bernie knows where all the money is” because some was paid out to feeder funds, Cotchett said.
Madoff agreed to speak with Cotchett after the lawyer threatened to sue his wife, Ruth, abc news.com reported.
“He cares about Ruth,” Cotchett said.