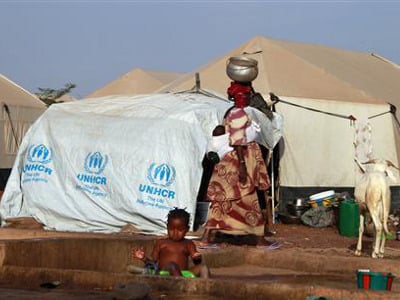 The World Bank plans substantial new funds to help Jordan cope with the influx of refugees from the civil war in Syria, and hopes new funds for central Africa will cement a peace deal there, the bank’s President Jim Yong Kim said.

“There will be significant amounts of new funding going to Jordan in the very near future to deal with this crisis,” he said in an interview, after a speech at the U.N. World Health Assembly in Geneva.

Jordan is one of Syria’s four immediate neighbors, along with Lebanon, Turkey and Iraq, inundated with refugees fleeing the two-year-old conflict in Syria. Of more than 1.5 million refugees, almost one-third are in Jordan, Reuters reports.

The United Nations has warned the numbers could triple by the end of the year, but humanitarian agencies say Syria’s neighbors are already shouldering a massive humanitarian burden, with many refugees camped with host families.

Jordan, which will be the venue for an international conference on Syria on Wednesday, has been turning away Syrian refugees for the past six days, aid workers said.

Kim said he was worried about the situation in the region and the World Bank stood ready to help. Jordan received a pledge of $250 million from the World Bank in January 2012 to help it cope with the economic downturn and the Syrian crisis, but King Abdullah asked Kim for more help two weeks ago.
“With Jordan, they are the first ones who have come and just asked me directly for increased assistance and we’ve said yes,” Kim said.
“So we are using all of our flexibilities to try to increase our lending to them at very low rates so they will be able to respond to the humanitarian crisis.”

Kim was speaking on the eve of a visit to Democratic Republic of Congo, Rwanda and Uganda, which he will make together with U.N. Secretary General Ban Ki-moon. They later hope to visit the Sahel region in North Africa, Kim said.

The World Bank will announce new funding during the African trip, but the money will be contingent on countries abiding by a peace deal brokered by the United Nations in February.
“The whole idea is that we’re trying to connect political, security and economic solutions,” Kim said.
“If you can keep the peace and provide better security and at the same time say: ‘All right, as long as you obey these peace agreements we’re going to really invest to try to help you create jobs in this region’, we think that’s the best hope.”

Kim did not say how much money would be going to which countries, but said it would fund infrastructure-focused projects, trade and agriculture, and was “the first part of a much larger amount”, aimed to bolster peace in the region.
“If you stick by your peace agreements, more money comes in.”

African leaders signed a deal in February to try and end two decades of conflict in the east of the Democratic Republic of Congo. Among the 11 signatories were Rwanda and Uganda, which had been accused by U.N. experts of supporting the M23 rebels who had hived off a fiefdom in Congo’s North Kivu province.

Kim said this would be the first time the heads of the World Bank and United Nations had jointly visited Africa, and it was a deliberate attempt to break a pattern of development funding arriving some time after peace was restored.
“What we’re saying is we should do it at the same time. We should go in together, we should use each other to leverage the countries in the region to stick by the peace agreements, to really commit to the economic development issues that we’re going to bring.”