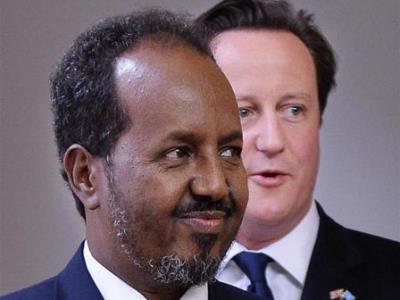 Somalia won international pledges of extra cash and military assistance at a major conference convened to help the East African country cope with the twin threats of Islamic militancy and piracy.

Somalia’s government is seeking to impose stability in a country ravaged by two decades of civil war, lawlessness and famine, and by its own admission it needs help from outside to rebuild decimated infrastructure and institutions.

At the end of the London summit Britain committed around 180 million pounds ($279 million), including funding for a planned doubling of the police force, and the United States donated $40 million on top of the $1.5 billion it has given since 2009, Reuters reports.

The country is enjoying a delicate recovery but relies heavily on others for its security.

An African Union military offensive weakened the al Qaeda-linked Islamist rebel group al Shabaab and piracy in key sea lanes off Somalia is at an all-time low thanks largely to a foreign naval presence.
“New terrorist threats have emerged in parts of Africa,” British Prime Minister David Cameron said at the end of the summit. “Radicalism is poisoning young Somali minds and breeding terrorism and extremism.
“This is a threat to our security, and if we ignore it, we will be making the same mistakes in Somalia that we made in Afghanistan in the 1990s,” he added.

British officials did not say when the military experts, or how many, would go to Somalia. Some of the British money is earmarked for doubling police numbers to about 12,000, and some for rebuilding the Mogadishu’s main prison.

Cash is also earmarked for training judges and creating mobile courts to tour lawless areas of the country.

And Britain will help boost radio communications on the Somali coast to combat piracy that the World Bank has estimated costs the world economy $18 billion despite the dramatic drop in incidents so far this year.

Speaking alongside Cameron, Somali President Hassan Sheikh Mohamud said Somalia had been given a chance to prove it could become a stable, inclusive, law-abiding country.
“We will prove in the eyes of the world that we will deliver … It’s the beginning of a new Somalia,” he said.

The conference took place at what organizers called a “pivotal” moment, after new parliamentarians were appointed last year who elected Mohamud. The vote was the first of its kind since military dictator Mohamed Siad Barre was toppled in 1991.

Somalia also must integrate the breakaway district of Somaliland and semi-autonomous Puntland region into a federal structure, ahead of elections scheduled for 2016. Somaliland boycotted the conference and Puntland said it was not invited.

Cameron played down the boycott, saying he had “very good” discussions with the Somaliland president recently. Mohamud said he had listened to the concerns of all “stakeholders” in Somalia ahead of the conference.

More than 50 delegates and organizations attended the conference, including Kenyan President Uhuru Kenyatta, who faces charges of crimes against humanity at the International Criminal Court related to allegations of orchestrating election violence.

Britain justified Kenyatta’s presence due to Kenya’s importance in helping to stabilize neighbor Somalia. Cameron’s office confirmed he met Kenyatta, but declined to say if it was a formal meeting or on the summit sidelines.

Kenyatta’s office said they had formal bilateral talks and that Cameron was keen to boost British trade with Kenya.