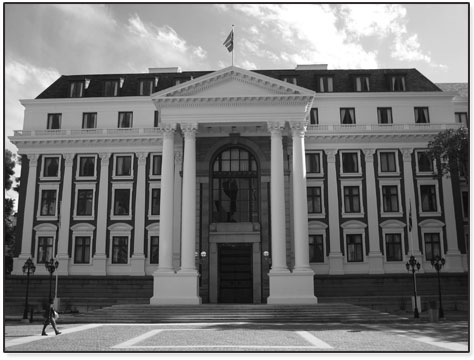 It was a red letter day for aficionados of South Africa’s long-running “arms deal scandal” with the matter receiving an airing in the country’s legislature and in one of its High Courts.

Parliament`s Standing Committee on Public Accounts (SCOPA) met for the tabling of new “arms deal” related submissions and the country`s president-presumptive Jacob Zuma as well as two subsidiaries of French defence group Thales briefly graced the dock in the Pietermaritzburg High Court in on charges that include bribery and corruption.

Zuma as well as Thales International (Thint) Holdings (Southern Africa) Pty Ltd and Thint (Pty) Ltd were in court to hear when they could apply to the bench for a permanent stay of prosecution on allegations that relate to the R47 billion 1999 Strategic Defence Package that saw SA acquire 50 fighter aircraft, 30 helicopters, four frigates and three submarines.
The Times reports the “two Thints”, represented by local Thales country manager Pierre Moynot (photo), will be back in court on 24 June to apply for a permanent stay of prosecution.
Zuma will make his application 25 August, when he is likely to be head of state. If their applications are dismissed, Moynot and Zuma will on that day also hear their trial date.
The “two Thints” each face one charge of racketeering, two of corruption and one of money-laundering.
Zuma may have to answer to one charge of racketeering, another of money laundering, two of corruption and 12 of fraud.
SCOPA
Meanwhile, Democratic Alliance MP Eddie Trent tabled submissions related to alleged SDP impropriety that he says “will provide a compelling new case for the reopening of investigations into the arms deal”.
Trent, who sits on SCOPA says the watchdog body will next Tuesday deliberate “submissions received from government departments and members of the public on outstanding matters relating to the arms deal.
In a statement issued after the meeting the veteran MP added he welcomed the fact that the multiparty committee had committed itself to “reviewing and deliberating” the submissions received.
“The decision to receive submissions on this matter was made a year ago, and long delays in the process have been highly frustrating,” he said. “There has been the perception of foot-dragging at times, and the sluggish response of some of the government departments that were requested to make submissions has further hampered the process.”
“Still, it is pleasing that the submissions will at last be considered by SCOPA. In next Tuesday`s session, members of the committee will have the opportunity to work together, to ensure that SCOPA`s mandate on this matter is fulfilled. I look forward to working with representatives of all parties as we finally get to the truth of this matter in the interests of the people of SA,” he said.
In a statement issued yesterday, Trent added that in order to obtain new information he had in November last year invited the public to make submissions to SCOPA. “… and we have subsequently received wide-ranging and impressive testimony from many of the individuals most intricately involved in the arms deal.
Trent said submissions related to:
·         “Various allegations of corruption which have emerged from and during the UK Serious Fraud Office`s investigation into the more than £110m commission paid by BAE Systems, of which more than £75m is believed to have been transferred to South African beneficiaries through a network of BAE front companies in the British Virgin Islands.
·         “Documentary evidence that the SANDF`s former head of procurement lied to SCOPA, and has received $3m from a successful bidder in the arms deal. To date, no action at all has been taken against this individual.
·         “Affidavits recently submitted by prosecutors that reveal new information on the mechanisms used to pay bribes, and which led to raids on the premises of Mr Fana Hlongwane and Mr John Bredenkamp.
·         “Unresolved anomalies concerning possible irregularities during the production of the Joint Investigation Report.
Trent could not be reached this evening to elaborate on the allegations and supporting evidence.