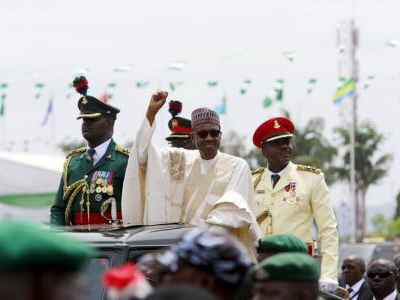 Staff at Nigeria’s finance ministry staged a protest on Tuesday, shutting down the headquarters in the capital Abuja for a second day and vowing to halt work for the whole week over pay demands.

The protesters want extra allowances worth 1.2 billion naira ($4.21 million) to cope with rising inflation, demands rejected by the ministry as “unjustified”.
“Nothing is working in this ministry and nothing will work this week,” said a protester wearing the uniform of a labour union who gave his name as Abdul.
“We are going to protest here for five days at the first instance and if nothing is done then we will move into the next stage,” he said, while blocking the ministry gate with some 100 colleagues. He declined to elaborate on what might happen next.
“Sack (Finance Minister) Kemi Adeosun now,” the protesters shouted.

Nigeria is going through its worst economic crisis for decades as a slump in oil revenues has hammered public finances and its naira currency.

Salisu Nainna, a spokesman for the finance ministry, said the strike was affecting only the ministry’s headquarters, not other units such as the public debt office.