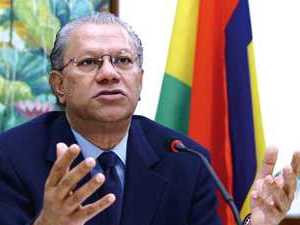 The parliamentary majority held by Mauritius’s ruling coalition shrank after one party pulled out of government a day after a cabinet reshuffle by Prime Minister Navinchandra Ramgoolam.

Former finance minister and Militant Socialist Movement (MSM) leader Pravind Jugnauth said his party was now in opposition. It had formed an alliance with the ruling Labour Party and the Parti Mauricien Social Democrate (PMSD) to win power during last year’s election in the Indian Ocean island, Reuters reports.
“The MSM has constantly been under attack since the coalition won the last parliamentary elections. There was no team spirit at all and we have been pushed out of the coalition. From now on we are in the opposition,” Jugnauth said.

The Labour Party now depends on the PMSD to stay in power. Ramgoolam added the position of finance minister to PMSD leader Charles Gaëtan Xavier-Luc Duval’s title of vice prime minister on Saturday in the reshuffle.

The cabinet changes were prompted by last month’s resignation of six ministers in protest at the arrest of the health minister on graft charges.

The ruling alliance now has just a slim majority over the opposition with 36 seats versus 33. Ramgoolam appointed Jangbahadoorsing Seetaram, who defected from MSM, as minister of business, enterprise and cooperatives, consolidating his majority.

Analysts said the political changes were unlikely to affect the government’s market-friendly policies for the almost $10 billion economy, consistently one of Africa’s most prosperous and stable.

Financial Secretary Ali Mansoor said on Sunday he expects the island’s economic growth to be around 4 percent for 2012 to 2014, instead of a gradual recovery to 5 percent.