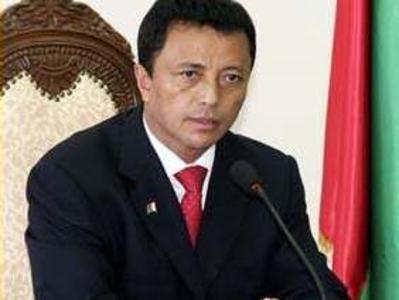 Madagascar’s exiled former leader Marc Ravalomanana was detained on Monday after returning to the Indian Ocean island for the first time since he was deposed in a coup in 2009.

Ravalomanana, exiled to South Africa, had tried returning to Madagascar several times since 2009 but was prevented by the authorities who feared his homecoming would bring further instability to the island, which has a long history of coups.
“It’s for his safety that he was arrested,” said President Hery Rajaonarimampianina, who took office in January after an election last December. “Besides, it’s not an arrest but rather placement in a supervised area to ensure his safety.”

There was a heavier than normal security presence in the capital, a Reuters witness said.

Madagascar is recovering from a crisis triggered by the coup five years ago, when donors withheld aid and investors fled, causing a contraction in the economy that had been attracting mining companies and other businesses. The World Bank and other donors restarted aid programmes after the peaceful election last year.
“I’m not coming to bring trouble but to bring peace and work for Madagascar’s development,” Ravalomanana had told reporters earlier in the day.

Government officials and Ravalomanana said the former president did not inform the authorities that he would return.

Rajaonarimampianina has been rebuilding ties with the World Bank and other donors and said he would encourage reconciliation on the island.
“I reiterate my spirit of reconciliation. The initiatives I have taken are in this direction,” he added, in reference to Ravalomanana’s detention.

One witness who saw Ravalomanana being detained said masked men stormed his home and took him away.

Another former president, Andry Rajoelina, who overthrew Ravalomanana with the help of the army in March 2009, had previously warned Ravalomanana that he would be held to account for crimes allegedly committed during his final weeks in power.

Ravalomanana can still rally support. The candidate he backed in the December election secured 46.5 percent of the vote in the run-off, although the ballot was won by Rajoelina’s candidate with 53.5 percent.

Rajoelina had accused Ravalomanana of ordering his presidential guard to shoot dead about 30 protesters in February 2009, when popular demonstrations against his increasingly autocratic leadership peaked.