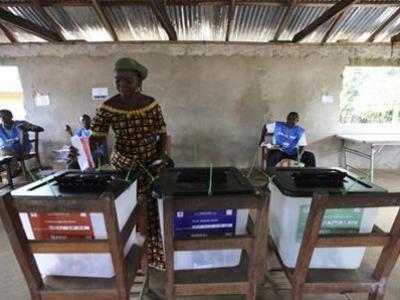 Liberia could tip into chaos not seen since its civil war if a presidential run-off election set for Tuesday is not delayed and reorganized, presidential hopeful Winston Tubman.

Tubman, a former United Nations diplomat, was meant to stand against incumbent Ellen Johnson-Sirleaf in the November 8 run-off but last week withdrew his participation in the process and called for a boycott, citing electoral fraud during the first round of voting last month.
“I think that at the end of the day we will have to evaluate what is likely to be better for the country: delaying the elections or going forward with them in a way that doesn’t carry the support of such a big party in the country,” Tubman told Reuters in an interview in the garden of his residence in the capital Monrovia, Reuters reports.
“The impact on the region would be huge if we were to descend into chaos again. The whole cycle would begin again, confusion in neighbouring countries, people running away, tension in the country. This would be far more costly in the long term than if we were to delay the election for a month.”

International election observers called the October 11 poll mostly free and fair, and the United States, regional bloc ECOWAS and the African Union have all criticized Tubman’s decision to boycott the second round.

Tubman’s CDC party has accused Liberia’s election commission of “massive fraud” during the first-round vote, in which Tubman took just under 33 percent of the votes to Johnson-Sirleaf’s nearly 44 percent.

The party said it had evidence that at least three ballot boxes were opened improperly by electoral staff shortly after the vote, and said there were several other inconsistencies that pointed to systematic rigging.
“Calling it massive fraud may be an exaggerated way of talking, but we feel that what happened did not properly reflect the protection of our interests, and we would like to see those interests respected,” Tubman said.

He said he was asking that his party be granted additional access to the vote counting process “so that we can see what is happening” and that a run-off be delayed by between two and four weeks to allow time for campaigning.

The election is the West African state’s first locally-organized presidential contest since the end of its civil war in 2003, and was meant to be a gauge of the country’s progress and to open the door to mine and oil investment.

A demonstration called by the CDC over the weekend failed to attract large-scale support, but the boycott call has raised fears that some of the party’s supporters could try to disrupt voting Tuesday.

The National Election Commission, whose chairman resigned last week under pressure from the CDC, said the vote would go ahead as planned.

Tubman is pushing for a delay and says he has sought but failed to talk directly to Johnson-Sirleaf about the issue.

A spokesman for Johnson-Sirleaf denied Tubman had requested a meeting and added “once he agrees to meet with the president, she will surely welcome him.”

Johnson-Sirleaf became Africa’s first freely elected female head of state in 2005, and has been internationally praised for reducing debt and maintaining peace in a country devastated by 14-years of fighting that killed up to a quarter of a million people.

But she faces criticism within the country for the slow pace of recovery from the war, with more than half the population still living on less than 50 cents a day and most citizens lacking access to power and water.

Tubman, whose running mate in the election is former soccer star George Weah, said that he felt unable to give in to the broad international pressure to reverse his boycott because it risked radicalizing his mostly young, unemployed supporters.
“I cannot on my own say I am pulling my party into this election on the 8th. If I were to do that before convincing my party that this is the way to go, the result would be worse for the process because my party would no longer be influenced by me and I don’t know what influences it would fall under.”
“It could become more extreme, it could become belligerent,” he said.

Tubman said he was urging his supporters not to resort to violence, but he reaffirmed his refusal to recognise results coming from the election and warned of long-term turmoil.
“We will do everything to be calm, law abiding. But there would be problems, I have to admit. People…who want to invest here would think, well, we better take our money elsewhere because Liberia might explode.” he said.