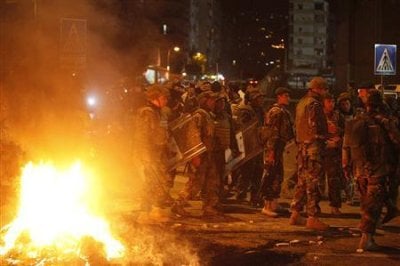 Hezbollah and its allies won support on Monday to nominate their candidate for Lebanon’s prime minister, giving them the upper hand in attempts to form a government and sparking accusations of a pro-Iranian coup.

Telecoms tycoon Najib Mikati, backed by a Hezbollah-led coalition, looked set to be asked to form a government after the first of two days of consultations among Lebanese politicians.

Caretaker Prime Minister Saad al-Hariri, whose government collapsed earlier this month, said he and his group would not serve in an administration dominated by Hezbollah, and Hariri supporters in north Lebanon called for a “day of anger.”
“As for the coup that Hezbollah is carrying out, it is an attempt to put the office of prime minister under the control of Wilayat al Fakih (Iran’s clerical authority),” Hariri loyalist Mustafa Alloush said in the northern city of Tripoli.

Lebanon’s power-sharing political system calls for the post of prime minister to be held by a Sunni and Hariri supporters said any figure who accepted a mandate from Hezbollah to form a new government would be considered a traitor.

Hariri supporters protested in several cities on Monday, blocking streets in Tripoli, burning tires to cut the main north-south highway outside the southern town of Sidon, and demonstrating in Beirut before they were dispersed by security forces. The road to Syria through the Bekaa Valley was also cut.

The United States, which has designated Hezbollah a terrorist organization, said a big role for the Shi’ite militant group could complicate Washington’s ties with Lebanon and affect U.S. aid. Hezbollah says the United States sabotaged earlier mediation talks between Hariri and Hezbollah.

Hezbollah and its allies walked out of Hariri’s unity government on January 12 in a dispute over still confidential indictments by a U.N.-backed tribunal investigating the 2005 killing of statesman Rafik al-Hariri, the prime minister’s father.

The political deadlock has deepened sectarian divisions in Lebanon and the prospect of a government formed by Hezbollah will alarm Israel, which fought a month-long, inconclusive war with Hezbollah guerrillas in 2006.

Israeli Vice Prime Minister Silvan Shalom said at the weekend there was a danger that an “Iranian government” would be established in Lebanon. He said Hezbollah “would no longer be merely a terrorist group operating with Iran’s backing, but a terrorist group in control of the country.”

Hariri has stayed on after his government collapsed and hoped to form a new coalition. But support from Druze leader Walid Jumblatt and six members of his parliamentary bloc, added to the 57 deputies from Hezbollah and their allies, plus Mikati himself, will give Mikati 65 votes in the 128-member parliament.

There was no immediate indication that Mikati, a wealthy businessman and former prime minister who sought to portray himself as a consensus figure, might bow to the show of street protest from fellow Sunni Muslims and withdraw his candidacy.

Mikati was briefly caretaker prime minister between April and July 2005, after Rafik al-Hariri’s death forced Syria to withdraw its troops from Lebanon.

After meeting President Michel Suleiman on Monday, Mikati said he would reach out to all parties in Lebanon if he were chosen. “I tell Prime Minister Saad al-Hariri, we are all one hand for the sake of Lebanon,” he told reporters.

Hariri, a Sunni Muslim who has support from the United States and Saudi Arabia, said his supporters would not serve under a prime minister chosen by the Iranian-backed Shi’ite group.
“The Future Movement … rejects taking part in any government headed by a March 8 candidate,” his office said in a statement on Monday. The March 8 bloc includes Shi’ite movements Hezbollah and Amal, along with Christian leader Michel Aoun.

Hariri said last week he would accept the outcome of the consultations for a new prime minister and would not resort to street protests.

The tension has pushed up the cost of insuring Lebanon’s debt against restructuring or default to an 18-month high of 367 points. Lebanese stocks rallied on Monday, rising 2.0 percent, led by gains in real estate firm Solidere which has been in the forefront of Beirut’s reconstruction since Lebanon’s 1975-90 civil war.

The indictments at the heart of the latest dispute between Hezbollah and Hariri were filed secretly this month at a U.N.-backed court in The Hague. They are expected to accuse members of Hezbollah, which denies any role in the killing and says the tribunal is serving U.S. and Israeli interests.

Politicians allied to Hezbollah have said the first priority of a government they form would be to cut links with the court.