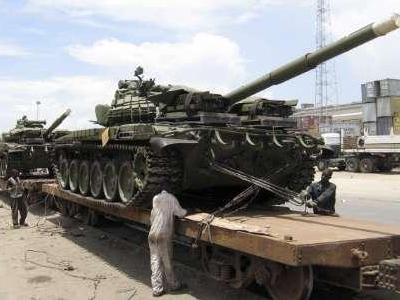 Nigeria’s former minister of state for finance has been arrested in connection with a $2 billion arms deal that is currently being investigated, a spokesman for the Economic and Financial Crimes Commission (EFCC) said on Tuesday.

“Yes I confirm to you that the former minister of state for finance, Bashir Yuguda, along with some other persons, have been arrested by EFCC in connection with the $2 billion arms deal with the former National Security Adviser (NSA). Investigation is still ongoing,” spokesman Wilson Uwujaren said.

President Muhammadu Buhari ordered the arrest of the former NSA, Sambo Dasuki, on Nov. 18, accusing him of stealing funds through phantom arms contracts and hampering the fight against the Islamist insurgent group Boko Haram.

Uwujaren declined to identify the other people arrested. A spokesman for Yuguda could not immediately be reached for comment.

Yuguda served as minister under previous president Goodluck Jonathan, when Dasuki was also in office. At that time Boko Haram took control of large parts of Nigeria’s northeast, where it has been trying to carve out an Islamic state since 2009.

Military equipment orders were normally done through the ministry of defence but this task was transferred to the NSA in the second half of 2014.

A senior official at the State Security Service said Dasuki remained under house arrest in the capital Abuja but was called in for questioning on Tuesday morning.

Boko Haram became the world’s deadliest militant group in 2014, when it killed 6,644 people, a more than fourfold increase on the previous year, according to a report by the Institute for Economics and Peace, an international think tank.