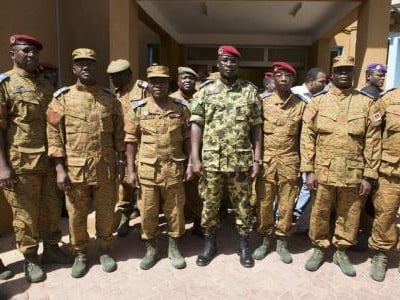 Burkina Faso’s military backed a presidential guard officer on Saturday to lead a transitional government after the resignation of President Blaise Compaore, resolving a power struggle within the armed forces by sidelining the chief of staff.

One of Africa’s long-serving rulers, Compaore stepped down on Friday after two days of mass protests against his attempts to change the constitution to extend his 27 years in power. At least three people were killed after protesters stormed the parliament building and set it on fire.

The unfolding crisis in the poor, landlocked nation is being closely watched by the United States and former colonial power France, which were close military allies of Compaore.

Under his rule, Burkina Faso became a key ally in Western operations against al Qaeda-linked groups in West Africa, but a coup d’etat would freeze U.S. military cooperation.
“Lieutenant Colonel Yacouba Isaac Zida has been elected unanimously to lead the transition period opened after the departure of President Blaise Compaore,” read a statement issued by the military hierarchy after the talks.

The form and duration of the transition will be decided in talks with all sections of society, the statement said.

The Union for Progress and Change (UPC), the main opposition party, immediately called for the army to open discussions with civil society and political groups on the roadmap to elections.

Troops loyal to Zida patrolled the quiet streets of the capital Ouagadougou on Saturday following his radio announcement that he was taking over as head of state to avoid a descent into anarchy and to ensure a swift democratic transition.
“This is not a coup d’etat but a popular uprising,” Zida said, dressed in military fatigues, in the studio of BF1 television. “I salute the memory of the martyrs of this uprising and bow to the sacrifices made by our people.”

Heavy gunfire had been reported near the presidential palace just before Zida spoke, but a military source said this was a localised incident.

U.S. State Department spokesperson Jen Psaki said in a statement on Friday, before Zida took power, that the United States was concerned by events in Burkina Faso. She appealed to all parties to avoid violence and to follow constitutional rules for a transfer of power via elections.

The events in Burkina Faso will also be carefully followed by other governments in West and Central Africa, where long-serving leaders are reaching the end of their constitutional terms in several countries, including Benin, Congo Republic and Democratic Republic of Congo.

The government of neighbouring Ivory Coast said on Saturday Compaore had arrived there with his family and entourage, but did not specify his location. Military sources said he was staying in a presidential retreat in the coastal resort of Assinie to the east of the economic capital Abidjan.
“He’s been in Assinie since this morning,” said one of the sources, who asked not to be identified. “He is not alone. Some members of his family are with him.”

Zida appealed in his early morning radio address to the African Union and West African regional bloc ECOWAS to show their support for the transition. ECOWAS urged respect for democratic rules on Thursday but has not spoken since the army stepped in following Compaore’s resignation.

It was the seventh time that a military officer had taken over as head of state in Burkina Faso since it won independence from France in 1960. It was previously known as Upper Volta.

Troops loyal to Zida deployed at strategic points across the dusty capital on Friday night, enforcing a curfew from 1900 GMT to 0600 GMT. The airport and land borders were also closed on his orders, soldiers said.

Despite being one of the world’s poorest nations, Burkina Faso positioned itself as a key mediator in regional crises under the stewardship of Compaore, who was renowned as a skilled negotiator and a wily, ruthless politician.

Compaore, a taciturn former soldier who had survived several bids to oust him since he seized power in a 1987 military coup, initially sought to defy the calls for him to step down after the protests turned violent on Thursday.

But his bid to cling to power – and its lavish trappings – angered many young people in a country stagnating in 183rd place out of 186 countries on the U.N. human development index.

With an average age of less than 18, most of the country’s 17 million population have never known another leader.

Crowds danced, cheered and blew whistles in the central Place de la Nation in Ouagadougou after Compaore’s resignation.
“This is a ‘sub-Saharan Spring’ and it must continue against all the presidents who are trying to hang on to power in Africa,” said law student Lucien Trinnou on Friday, referring to the Arab Spring that toppled several long-term leaders.