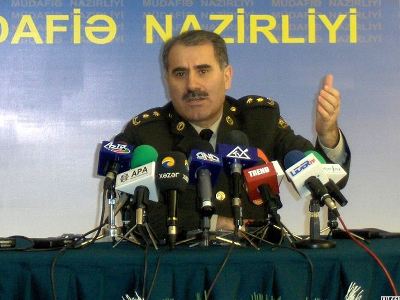 Azerbaijan’s defence ministry was quoted as saying Azeri troops would eventually be sent to seize back the Armenian-backed breakaway territory of Nagorno-Karabakh.

Russia’s Interfax news agency said the ministry accused Armenia of repeatedly obstructing talks to resolve the dispute, which in the past two years has seen the worst skirmishes since a 1994 cease-fire.

The comments came only weeks before the presidents of Russia, Armenia and Azerbaijan were scheduled to meet in the Volga river city of Kazan as part of efforts to settle a major source of instability in an oil and gas transit zone, Reuters reports.
“Eventually, Azerbaijani soldiers will meet the expectations of the people, the government, and the supreme commander-in- chief and will liberate the occupied land from the enemy,” Azeri defence ministry spokesman Eldar Sabiroglu told a news conference, according to Interfax.

In a separate report, the agency cited an Armenian defence ministry press officer who accused the Azeris of “preparing ground for new provocations” by disseminating misinformation.

The two southern Caucasus countries fought a six-year war over the territory which broke away from Muslim Azerbaijan with the help of Christian Armenia during the collapse of the Soviet Union. The mountainous territory, and considerable lands around it, were wrested entirely from Baku’s control.

Azerbaijan’s President Ilham Aliyev, who has ramped up his country’s military power with recent arms deals, has said Azerbaijan is willing to go to war with Armenia to reclaim Nagorno-Karabakh.