After creating the Mamba-based Nyoka armoured personnel carrier (APC) and 82 mm Mortar and R107 Rocket Weapon Platforms (WPs), Twiga Services and Logistics has launched the larger Nyati APC, which is now in production.

Twiga says the Nyati is a well-protected 4×4 that uses modern main components while keeping unit costs low. It is mine- and ballistically-protected, with standard NATO STANAG Level 2 ballistic protection up to 7.62×39 mm armour piercing rounds; Level 4B blast protection protects up to 10 kg mines under the centre of the vehicle. The vehicle is suitable for a wide range of military, security, peacekeeping and policing operations.

Production is underway under a technology transfer agreement for a launch customer in Africa. Twiga said the customer is developing its indigenous defence industry capability and local manufacture of the Nyati APC is part of this process.

Twiga began development of the vehicle at the end of 2018, partly as an in-house project to meet the requirements of a modern 4×4 infantry fighting vehicle (IFV) using South African battle experience, and partly for a potential export customer, according to Damian de Lange, CEO of Twiga. 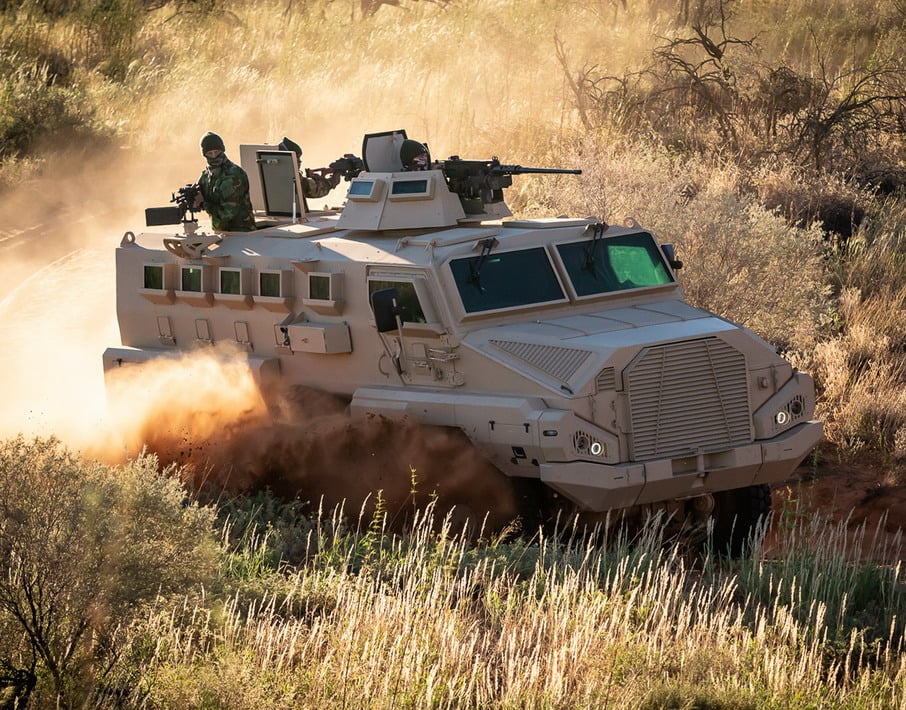 Vehicle trials began in early 2019 but were stalled due to the COVID-19 pandemic and subsequent lockdowns. Nevertheless, testing and evaluation for production was completed in early 2021, with production beginning from mid-year. The Nyati was expected to make a big splash during its launch at the Africa Aerospace and Defence exhibition in 2020, but due to COVID-19 postponing the event, the official launch could not happen.

De Lange noted that competition in the 4×4 mine and ballistic protected vehicle area is stiff. “Many competing vehicles in this class are strongly supported by home country government programmes and subsidies. Sadly, this is not the case in South Africa. The Nyati stands out as a modern, powerful 4×4 Infantry Fighting vehicle that is standard STANAG Level 2 and accommodates troop back-to-back seating. The main components provide reliability, maintainability and support into the future which is key and the pricing of the Nyati is very competitive. An added advantage is that the Nyati has been designed and developed to enable the Transfer of Technology.”

Now that production is underway, Twiga is developing Battlefield Ambulance and Weapon Platform variants. In addition, collaborative offerings will include other South African defence industry ancillary equipment especially in the area of communications and weapon systems. No stranger to vehicle production

Twiga is no stranger to armoured vehicle manufacture, having designed, developed and qualified the Nyoka 4×4 range of mine and ballistic protected vehicles in South Africa, which can be assembled in a client’s country. The Nyoka is based on the Mamba armoured personnel carrier and older Unimog driveline.

The 6-tonne class Nyoka has ballistic protection equal to STANAG Level 1, and can withstand a 7 kg mine blast. The armoured personnel carrier variant has three weapon mount positions on the roof whereas the Weapon Platform variant is used for the R107 rocket system and 82 mm mortar to provide indirect fire support for debussed troops.

The Uganda People’s Defence Force (UPDF) is one of the Nyoka’s customers, and since 2011 Twiga’s sister company Impala Services and Logistics has been manufacturing the Nyoka in Uganda together with the Ugandan military. The first Nyoka were commissioned at the Maga Maga defence industry facility in August 2014. Impala Services continues to manufacture in Uganda and provides fourth line re-manufacture programmes for the UPDF in Mogadishu.

Twiga has a substantial footprint on the maritime side and offers its Rugged Military Patrol Boat series, available in sizes from 6.5 to 12.5 metres. These boats, made out of high density polyethylene (HDPE), can be armed with 12.7 mm machineguns and 20 mm cannon, and are suitable for fast attack, combat support, indirect fire, surveillance operations and interdiction at sea. Due to the positive buoyant properties of HDPE and the construction of these boats, they are virtually unsinkable.

The most popular of these boats, the 850 MPB and 1050 Command MPB, are in service in East Africa and South East Asia.

Twiga also supplies custom designed and specialised off-road trailers to carry its boats, fuel and water bunkers and ammunition, and a range of weapon mounts that can be mounted on armoured vehicles and boats.