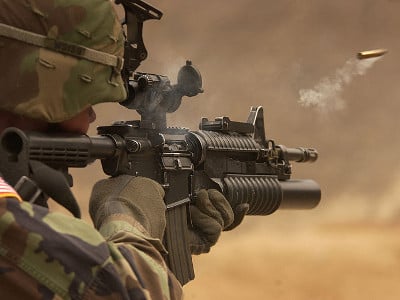 Western arms makers are jockeying to take advantage of expanding defense budgets among NATO allies and in other regions. Shares in Lockheed Martin, Boeing and other big U.S. arms makers have seen double-digit percentage rises since President Donald Trump took office in January 2017.
“We always felt like we were a company competing against countries. Now we feel like we’re a company within the United States defense industry, and that we have some sponsorship from the United States government to work these deals,” Wes Kremer, Raytheon Co.’s head of Integrated Defense Systems, told Reuters at the airshow, 40 miles (60 km) southwest of London.

Many U.S. executives hope that bigger defense budgets and greater U.S. government advocacy will spur more sales, but say it may take time for the new policy to translate into orders.
“It’s very early days,” said John Bottimore, vice president of international business development at the U.S. unit of Britain’s BAE Systems. “It’s too early to say it’s making a difference yet.”

The U.S. State Department on Monday hailed the implementation of the Trump administration’s new weapons export policy, days after Trump pressured NATO allies at a meeting in Brussels to boost their military spending.

The State Department said the new policy was “a whole-of-government effort to expedite transfers” that support U.S. foreign policy and national security objectives.

The changes, first rolled out in April, are aimed at expanding sales to allies, bolstering the American defense industry and creating jobs at home.

Kaidanow told reporters the U.S. was working with NATO ally Turkey on the possible sale of a Patriot system to halt Ankara’s plans to buy a Russian-made S-400 system that has sparked serious concerns.

Raytheon’s Kremer said Turkey showed how the Trump administration was already making a difference.
“Turkey is an example of where this administration has engaged … to get the U.S. systems out there,” he said, referring to his company’s push to sell its Patriot missile defense system to Ankara.

However several executives at the Farnborough Airshow, speaking on condition of anonymity, raised concerns that the new policy did not go far enough, and said they still lacked details on what equipment could now be sold.